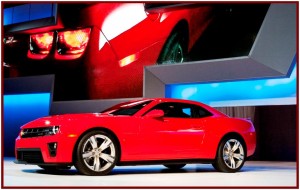 The ZL1 name comes from an all-aluminum racing engine, which was developed in the late 1960s and installed in 69 production 1969 Camaro models.

The 2012 Chevrolet Camaro ZL1’s supercharged 6.2L engine is SAE-rated at 580 horsepower (432 kW) and 556 lb.-ft. of torque (754 Nm) – making it the most-powerful production Camaro in history, Chevrolet said today. At its unveiling at the Chicago Auto Show last winter, horsepower was estimated at 550. It wouldn’t be the first time that a performance car was under-rated to foil competitors. ZL1 will be the fastest factory Camaro in history.

This means that ZL1’s horsepower is more than 150 horsepower higher than the advertised power of the limited production 1969 Camaro ZL1’s 427 cubic-inch big block V8 engine. The ZL1 is aimed squarely at the Ford Mustang Shelby GT500 (540 horsepower and 510 lb.-ft. of torque), and will likely be priced in the $50,000 range when it finally goes on sale in early 2012.

Earlier, less powerful 2011 production Camaro models faced about a 300 pound weight disadvantage against the Mustang because of a larger size and more sophisticated independent rear suspension. Nonetheless, Camaro has been easily outselling the Mustang since production reached normal line speeds.

The weight disadvantage has been countered in the ZL1 with high-tech materials, sophisticated engine controls, cubic inches and raw torque. Curb weight and pricing, crucial here, were not released.

ZL1 also borrows heavily from the advanced technology used by Cadillac and Corvette. This will likely spur some lengthy – and tiresome – discussions among enthusiasts and debates about which cars are the better values.

Nonetheless, this Camaro is designed to achieve minimum lap times on road-racing circuits and excellent driving dynamics on the street – not unlike the Cadillac CTS-V or the Chevrolet Corvettes. The ZL1 has electric power steering and Magnetic Ride Control, claimed to be the world’s fastest-reacting suspension system, with driver selectable Tour and Sport settings.

The new all-aluminum LSA supercharged V8 is part of GM’s famous small-block engine family. There are six-bolt main bearing caps that clamp and lock in the forged steel crankshaft to the deep skirt block. A Roots-style blower uses an efficient four-lobe rotor set and compact intercooler to deliver boosted air into the high-flow cylinder heads.

For the Camaro ZL1, the LSA features a unique induction system, with a lower-restriction air filter, dual inlet paths, and improved airflow through the supercharger housing. Other changes include a higher-efficiency supercharger intercooler and electric power steering system, which consumes less engine power than hydraulic-steering systems.