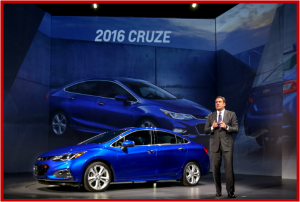 The battle of best-selling global compact cars continued today with Chevrolet pricing its brand new Cruze model $1980 cheaper than the Honda Civic LX, an acknowledged leader in the class. The formidable Cruze – Chevy’s bestseller globally – is also less expensive than the Toyota Corolla L (-$570) and the Hyundai Elantra SE (-$580).

Larger and lighter by as much as 250 pounds, the heavily revised Cruze goes on sale in the U.S. during Q1 of 2016. Other markets, as many as 40 or more, will follow.

A new 1.4-liter turbocharged engine that is rated at an estimated 40 mpg highway powers the compact Cruze. With 153 horsepower and 177 lb. ft. of torque, crisp performance is available (zero-60 ~8s) as well as pump relief with a range of more than 500 miles.

Better still, even though the compression ratio of the new GM engine is 10:1, thereby helping with the high specific output and hence efficiency, the dohc four-cylinder runs on regular fuel. Six-speed manual or automatic transaxles are offered. A stop/start system increases the Cruze’s efficiency in traffic.

While the powertrain might be the heart of a car to traditionalists such as the writer, more important to newer generation buyers are the electronics. Starting with a revised MyLink App that offers better performance, plus compatibility with both Android Auto (eventually) and Apple CarPlay (immediately), the smartphone is now as much of a part of the interior as the standard seven-inch-diagonal screen and more costly eight-inch screen.

In short, this Cruze is a winner, but that awaits customer confirmation. (See 2016 Chevrolet Cruze Debuts in Detroit and 2016 Chevy Cruze Debuts end of June, on Sale this Winter)

Ken Zino is an auto industry veteran with global experience in print, broadcast and electronic media. He has auto testing, marketing, public relations and communications expertise garnered while working in Asia, Europe and the U.S.
View all posts by Ken Zino →
This entry was posted in marketing, new vehicle and tagged auto news, autoinformed, autoinformed.com, Ken Zino. Bookmark the permalink.