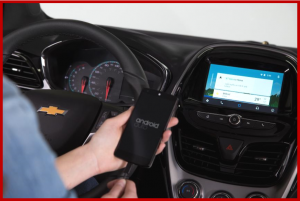 Chevrolet customers in markets around the world,  including Brazil, Mexico and Canada will be able to buy the latest smartphone integration.

Chevrolet will offer Android Auto and Apple CarPlay smartphone compatibility in 14 2016 models, more than any other brand. Chevrolet’s seven-inch MyLink system allows owners access to Android and Apple devices. The eight-inch version of MyLink will be compatible only with Apple CarPlay at the beginning of the 2016 model year. Development is not yet complete on Android Auto compatibility. However, it may be available on the eight-inch version of MyLink later in the 2016 model year, Chevrolet said at a media briefing in Detroit.

With more than 2.3 billion smartphones in use globally, GM appears to be well ahead of other automakers in mining the connectivity gold rush now underway. In 2014, the 14 models included in this expansion accounted for more than 2.4 million vehicle sales, or 51% of Chevrolet’s total global sales. As just one example of the lead, Android Auto is just now debuting on the 2015 Sonata with the optional Navigation system, as the only application available at Hyundai.

“This is a great example of how Chevrolet continues to democratize technology that’s important to our customers,” said Mary Barra, CEO of General Motors, who acknowledged, “for most of us smartphones are essential.”

Each system uses popular smartphone applications. Android Auto is built around Google Maps, Google Now and the ability to talk to Google, as well as a growing audio and messaging app ecosystem that includes WhatsApp, Skype, Google Play Music, Spotify, and podcast players. (A full list of supported apps is available at Android.com/auto)

Apple CarPlay allows drivers to make calls, send and receive messages and listen to music right from the touchscreen or by voice via Siri. Apple CarPlay supported apps include Phone, Messages, Maps, Music and compatible third-party apps. (A full list of those apps can be found at Apple.com/ios/carplay.)

It is claimed by GM that many apps can be controlled via voice commands through a button on the steering wheel, helping drivers spend more time with eyes on the road. The Department of Transportation is woefully late in regulating the distracted driving epidemic and has published only best practices in the growing area of consumer electronics invading automobiles. NHTSA data show that during the day daylight 660,000 drivers are using cell phones or manipulating electronic devices while driving,

Chevrolet was the first brand to introduce Siri Eyes Free functionality and the first and only car company to offer available OnStar 4G LTE connectivity across a range of cars, trucks and crossovers in the U.S. and Canada. In less than one year, Chevrolet has connected more than a half-million customers to high-speed 4G LTE Wi-Fi.
Chevrolet customers in markets around the world including Brazil, Mexico and Canada will benefit from this new level of smartphone integration.

Using either application is “simple” in a compatible 2016 Chevrolet. A “Projection” icon on the MyLink screen is visible when a phone is not connected, then changes to indicate either CarPlay or Android Auto – whichever is applicable – when a compatible phone is connected via USB.

Android Auto requires a phone running the Android Lollipop 5.0 operating system or later, while Apple CarPlay requires an iPhone 5 or later. Compatible apps need to be downloaded to a phone before using. Apple and Google’s privacy statements and terms of use apply. Data plan rates may also apply.

Ken Zino is an auto industry veteran with global experience in print, broadcast and electronic media. He has auto testing, marketing, public relations and communications expertise garnered while working in Asia, Europe and the U.S.
View all posts by Ken Zino →
This entry was posted in customer satisfaction, marketing and tagged android auto, apple carplay, autoinformed, Ken Zino. Bookmark the permalink.