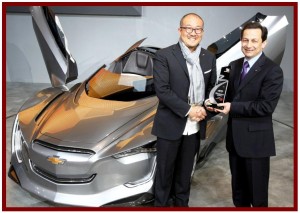 The Chevrolet Miray was named Best Concept Car at the 2011 Seoul Motor Show. Journalists attending the show voted their favorite cars in three categories: Best Concept Car, Best Green Car and Best Passenger Car. The Miray, which made its world premiere in Seoul, received the most votes among concept cars on display.

The Miray roadster is significant because it was developed at the General Motors Advanced Design Studio in Seoul, increasingly the source of small car work for the U.S. based and taxpayer owned General Motors Company.

Chevrolet, now anointed as a GM global brand, is attempting to break into the protected Korean market, with it’s success somewhat dependent on increasing imports under the controversial and still un-ratified Korean Free Trade Agreement in the United States.

“This honor is even more special as it was given to Chevrolet’s first concept car displayed in Korea at the brand’s very first stand at a domestic auto show,” said GM Korea President and CEO Mike Arcamone. “It recognizes Chevrolet’s future vision and new ideas. Chevrolet will continue to bring new vehicles with innovative design and technology to Korea.”

“Miray” is Korean for “future,” and at the moment the future looks bright for not only GM’s Daewoo subsidiary but also Hyundai and Kia, which are also based in Korea’s protected market from which the export globally.

Korea ranks at the very bottom — 30 out of 30 among the largest automotive markets — for import market access. The average among major developed economies is approximately 40% market penetration by imported automobiles, but in Korea, the total of import vehicles from all global manufacturers in all countries entering the Korean market is around 4%. This is about 40,000 vehicles in a market that buys roughly one million vehicles annually.

The Chevrolet Miray itself is clearly a show car, but with hints of realistic or at least semi-realistic production technology. Miray is made with carbon fiber and carbon fiber-reinforced plastic, although no weight was revealed. It’s powered by a 1.5-liter turbocharged 4-cylinder engine; two15-kW electric motors and a relatively small 1.6-kWh lithium-ion battery pack – all out of the GM production parts bin. More than 60 mpg is claimed for the two seater.

The two front-mounted 15-kW electric motors are for quick acceleration and zero emissions in urban driving – but with the small lithium ion battery it won’t run on electricity for very long – even with recharging via regenerative braking energy.

For longer range driving, the Miray’s 1.5-liter four-cylinder turbocharged engine combines with the electric motors. The four-cylinder engine, is mounted behind the cockpit, and is connected to the rear wheels via a dual-clutch automatic transmission, now a common industry production practice since DCTs reduce a powertrain’s size by eliminating the hydraulic torque converter, and computer controls can provide optimized fuel economy ratings tuned to government test cycles.

Short term prospects for expensive and range limited pure electric vehicles are dependent on government mandates and subsidies of course, but hybrids are fairing somewhat better -at least in the U.S. – although they remain only a tiny couple of percentage points of  projected  global sales volumes for the balance of the decade (2010 2.2%).

Whether a two-seat hybrid can be successful remains to be seen. Frequent automotive innovator Honda is trying to prove that it can work with its two seat CR-Z, which has sold about 3,000 units in the U.S. this year. And journalists, who buy few cars, do not have a great track record predicting mainstream auto sales successes. (See also Korean Free Trade Agreement gets UAW, Ford Support, GM Will Repay $1.0 Billion of Korean Debt and Driving Impression – Chevrolet Cruze, Hybrid Vehicle Sales Slump! EV Demand Overhyped?)