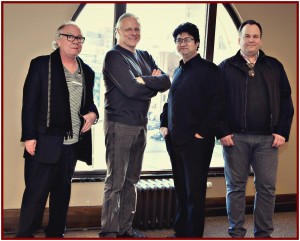 Would you buy a Chevrolet from these guys?

Chevrolet has selected Commonwealth as its new global advertising agency responsible for the development of creative campaigns for all types of Chevrolet ads. The newly formed Detroit-based Commonwealth is a 50-50 joint venture, combining San Francisco-based Goodby, Silverstein & Partners of Omnicom Group, and New York-based McCann Erickson Worldwide, of Interpublic Group.

The latest marketing move at GM follows the announcement in January that the world’s largest automaker is consolidating all of its media buying under Carat, formerly its European agency of record in what was said to be a highly contested review of the $3 billion General Motors media account.

Carat manages most of GM’s global planning and buying operations for advertising and marketing, including broadcast, digital and social media, but does not include creative services.

Both moves are part of the profit-challenged company’s effort to seek efficiencies in its marketing operations and more effectively promote its brands around the world.

“These agency consolidations are expected to create about $2 billion in savings over the next five years, with a portion used to take advantage of key global marketing opportunities and strengthen the focus on our global Chevrolet brand, and a portion hitting the bottom line,” said GM Vice President and Global Chief Marketing Officer Joel Ewanick.

Commonwealth will be” guided” by an eight-person Global Advisory Board, which will oversee all creative initiatives and strategy for Chevrolet globally. Assignments will be handled through global hubs, which will operate in Detroit, Milan, Mumbai and Sao Paulo.

The board includes four established creative executives in the industry: Jeff Goodby, who will serve as Creative Chairman; Washington Olivetto, Linus Karlsson and Prasoon Joshi. The four creative leaders will work in collaboration on all major creative initiatives and resource allocations.