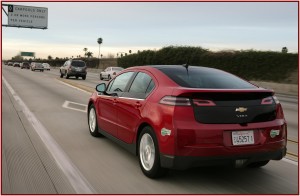 Originally restricted to vehicles with two or more occupants to help minimize congestion, the lanes are now open to single occupancy use by owners of advanced, low-emission vehicles.

Chevrolet Volts with a ‘Low Emissions Package,’ which is standard for California Volts, began shipping from the General Motors Detroit-Hamtramck plant this week and will begin arriving at the more than 140 Chevrolet dealerships in California before the end of the month.

Owners of a 2012 Volt with the emissions package – it’s a more expensive catalytic converter and an additional air pump that injects oxygen into the exhaust – will be eligible to apply for one of 40,000 HOV (high occupancy vehicle) lane stickers issued to vehicles that are dubbed as ones meeting the California Enhanced, Advanced Technology – Partial Zero Emissions Vehicle rating. Commuters who use carpool lanes in Southern California save an estimated average of 36 minutes a day, or about a one-third of their total driving time.

The new emissions package also makes owners of the 2012 Chevrolet Volt eligible for up to $1,500 in state rebates through the California’s Clean Vehicle Rebate Project. This taxpayer-funded subsidy is in addition to the federal government’s $7,500 tax credit. Both are controversial methods of governments interfering in the marketplace.

This is nothing more than socialism  for the wealthy, according to critics, since it allows single occupant vehicles access to more than 1,400 miles of California HOV lanes. The subsidy is crucial to the sales of the Nissan Leaf EV, Honda Civic Natural Gas, Smart ForTwo EV, and Tesla roadster, as well as upcoming plug-in hybrids from Cadillac, Ford and Toyota, among others expensive electric vehicles.

Originally restricted to vehicles with two or more occupants to help minimize congestion, the lanes are now open to single occupancy use by owners of advanced, low-emission vehicles. Volts registered in Georgia, New York and Florida also are also eligible for single occupancy access to carpool lanes.

“The Volts with the Low Emissions Package are certain to be a strong draw for California commuters looking to travel the state’s notoriously congested freeways in the carpool lane,” said Chris Perry, vice president of Chevrolet Marketing.