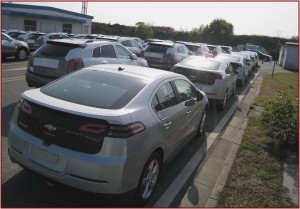 China will be among the first major export markets for the U.S.-built Chevrolet Volt.

The first Chevrolet Volt EVs arrived in China at the HaiTong Port in Shanghai this month. The Volts are part of a 10-vehicle General Motors demonstration fleet to be deployed in Beijing, Tianjin and Shanghai. What GM terms is an extended-range electric vehicle will be used to promote the Volt among potential customers, ministry leaders, university professors and the media.

Due to a combination of tariffs and incentives for locally-produced Chinese vehicles – at the core of China’s job creating industrial policy – the Michigan built Volt (more than $40,000 in the U.S. without government incentives) will be at about a $19,000 per hybrid disadvantage, not good news for UAW employees who build the Volt in Hamtramck.

While questions remain about the significance of the two battery fires that occurred after severe NHTSA testing – one with the battery removed from the Volt, thereby taking away much of its impact protection – General Motors is continuing its expansion of sales of the Volt. Next year 13 Shanghai GM Chevrolet dealerships in eight Chinese cities will start selling the Volt. It is unclear at the moment if the Volt will qualify for Chinese government subsides under its job creating industrial policy. Unsubsidized Volt EVs will be priced at RMB 498,000 (~$79,000), which is laughably non-competitive.

Nevertheless, China will be among the first global markets to offer the Volt, which provides up to 35 miles (80 kilometers) of electric driving. With its onboard engine-generator – essentially the world’s longest extension cord, Volt has a total driving range of 570 kilometers in so called extended-range mode, which is really just a hybrid running on gasoline.

GM intends to use Chinese battery suppliers in future electric vehicles that are now under development in China with SAIC – the latest setback for beleaguered U.S. workers who are facing grim employment prospects in the moribund U.S. economy. This is no longer a blue-collar or solely a UAW problem. College level white collar engineering jobs are at stake in advanced technologies touted by politicians as the key to returning the U.S. to global competitiveness.

Worse, for GM shareholders (and Ford and Chrysler), China earlier this month imposed additional punitive tariffs of almost 22% on top of existing 25% taxes on the import of the vehicles into China in an apparent violation of WTO rules. The U.S. – or Uncle SAP – only imposes a 2.5% tariff on vehicle imports.