Posted on 2 September 2019 by Kenneth Zino 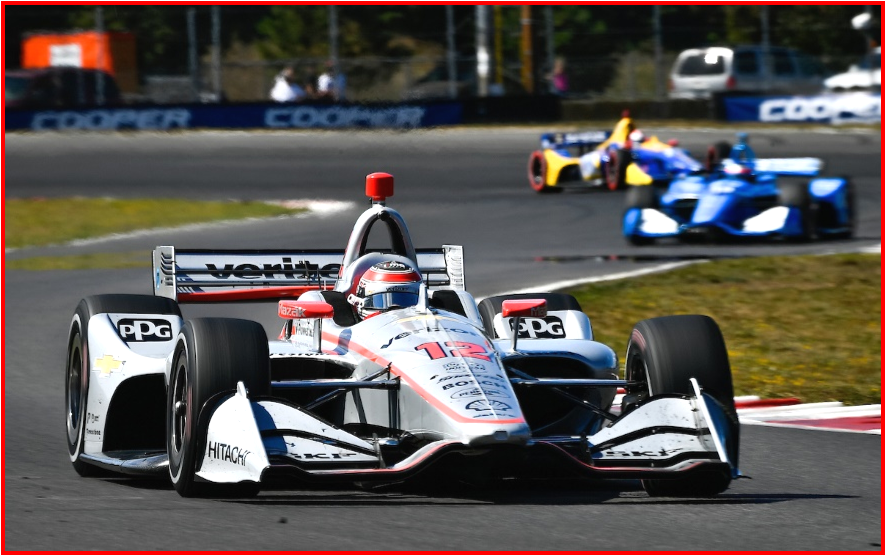 The accident predictably came in Turn One – as it did last year at Portland – at the start.

Will Power, driver of the No. 12 Verizon Team Penske Chevrolet IndyCar V6, won the NTT IndyCar race at Portland International Raceway in Portland, Oregon. This is the second victory in the last three races for Power and the 37th IndyCar victory of his career, tying him for 6th place on the all-time list.

It was a Black Weekend for professional motorsports with the death of Anthoine Hubert, who died on Saturday during a horrific accident involving several cars after he went off course at Circuit Spa-Francorchamps, Belgium. The 22-year-old Frenchman was racing for BWT-Arden in the FIA Formula 2 Championship.

His teammate Josef Newgarden (No. 2 Hitachi Chevrolet) extended his lead in the championship standings going into the season finale Sunday, Sept. 22 at WeatherTech Raceway Laguna Seca in Monterey, Calif. Newgarden avoided two cars tangling in front of him in an opening-lap ruckus before going on to finish fifth.

Newgarden, the 2017 champion, holds a 41-point lead on Rossi, a 42-point lead on Pagenaud and pushed Dixon (minus-85) closer to championship elimination heading into the season-ending, double points race.

Newgarden and Pagenaud started buried in the 23-car field after qualifying 13th and 18th, respectively. This put them in harm’s way if a first-turn accident occurred.

The accident predictably came in turn one – as it did last year at Portland – at the start when Rahal Letterman Lanigan Racing’s Graham Rahal (No. 15 One Cure Honda) bounced into the side of Andretti Autosport’s Zach Veach (No. 26 Gainbridge Honda). Newgarden braked hard and kept his car unscathed, but a trailing Pagenaud spun from a hit from Carlin’s Max Chilton (No. 59 Gallagher Chevrolet). Fortunately for Pagenaud, his car sustained minor damage and he was able to race .

Ken Zino is an auto industry veteran with global experience in print, broadcast and electronic media. He has auto testing, marketing, public relations and communications expertise garnered while working in Asia, Europe and the U.S.
View all posts by Kenneth Zino →
This entry was posted in racing and tagged auto industry commentary, autoinformed.com, automotive blog, indycar, Ken Zino, Team Penske, Will Power. Bookmark the permalink.