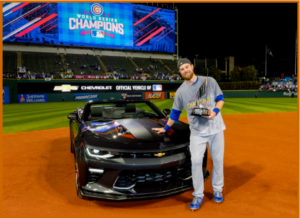 Breaking numerous suspicions, including the Billy Goat curse, the Chicago Cubs in the early hours this morning defeated the Cleveland Indians – who were festooned with their racially offensive Chief Wahoo emblem – by a score of 8 to 7 in the bottom of the tenth at Cleveland, thereby winning the World Series.

It was proof positive that the team with the best record in baseball during the regular 162-game season was indeed the best team in baseball – no matter what the inane commentators opined ad nauseam during the playoffs and the series. The World Series went seven games with some of best, toughest, most aggressive baseball played in my memory. The last time the Cubs won a series was in 1908 by beating the Detroit Tigers, as they did the year before. 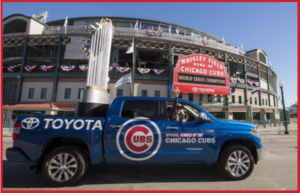 Too bad that Major League Greed and the sensationalist Fox commentary had to be endured for all seven games.

The Fox commentary – between repetitive, long commercials – maintained its established position as a leader in unfair and unbalanced coverage. Worse, some of the money-making advertisements (it’s estimated 40 million viewers were being bought) were repugnant political attack ads that has any thinking American worried about the state of our democracy as the November Presidential election looms.

Given the gridlock in Congress, maybe we should call it the residential election for the keys to  occupy the White House. After the First “family” moves in – nothing happens.

No matter what happens in the poll booths, if corrupt, inept Hillary of the blue-stained-dress fame of her political mate is indeed trumped by a no-nothing, tax cheating, woman abuser Donald T – rump, (as in the ass-end of a party of hatred), baseball will prove to be bigger than both of these losing beer-league players. Clinton and Trump wouldn’t serve well as infield dirt in the Show. Either of them will work on taking America back to being a sandlot player in the international political games.

Pictured at the top is Major League Baseball’s 2016 World Series Most Valuable Player, Chicago Cubs’ Outfielder Ben Zobrist, with a 2017 Chevrolet Camaro SS 50th Anniversary Edition –  a reward from Chevrolet, the Official Vehicle of MLB. Chevrolet was not among the offensive advertisers in AutoInformed’s view. Baseball and apple pies are fine. Debased parties chevying voters is not. (See Camaro ZL1 Posts 7:29.6 Lap at Nürburgring and 2017 Camaro ZL1 – Most Powerful Production Version Ever)