Posted on 4 October 2016 by Kenneth Zino 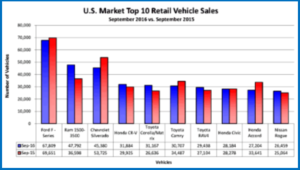 U.S. light vehicle sales in September once again slowed from the record-setting pace established at the beginning of the year. Overall, the light vehicle market was off -0.5% year-over-year. Truck sales rose 4.5%, and car sales, not surprising given market trends, declined -7.1%.  Consultancy AutoData says that the seasonally adjusted annual rate (SAAR) in September was 17.76 million units versus 18.05 million units during September 2015.

“The market may not be as hot as it once was, but it is healthy, and the sales pace is strong,” said Cody Lusk, American International Auto Dealers Association president.

The largest U.S. automaker in terms of sales, General Motors, basically held ground among the Detroit Three by selling 250,000 vehicles for a -0.6% decline compared to last September, which was part of a record setting year. GM’s retail market share rose 0.3% in September to 16.6%, the largest retail share gain of any full-line manufacturer. GM has gained retail market share in 15 of the past 18 months, back to April 2015. Bucking a trend, GM car sales at 76,000 rose 10%.

Ford Motor Company took it on the chin at 203,000 vehicles, a whopping -8.1% decline. Retail sales also declined -4% in September, with 162,327 vehicles sold for the month. Fleet sales of 42,120 vehicles, including daily rental, commercial and government segments, were down 21%. Ford said this is “consistent with the company’s plan to front-load fleet sales this year.” Sales to daily rental companies declined 36% for the month. Notably, Ford Motor car sales at 51,000 dropped -21%. Ford had its strongest year-over-year comparison of the year in September, with a good September a year ago when retail sales and overall sales were up 23%. It couldn’t keep pace.

“Toyota brand (82,000) outpaced the industry to be the no.1 retail brand in September, led by Camry, RAV4, and Corolla, and the fourth quarter outlook is strong thanks to our best light truck supply of the year.” said Bill Fay, group vice president and general manager of the Toyota division. Lexus posted September sales of 25,801 units, up 2% on a volume basis and DSR basis.

Number four automaker FCA US could declare victory with sales at 193,000, even with a year ago. However, car sales at 29,00 dropped -27%. The Ram Truck brand posted a 27% gain in September compared with the same month a year ago as pickup truck sales increased 29% y-o-y. Both the Dodge Charger and Dodge Challenger turned in double-digit percentage increases in September while the Jeep Grand Cherokee posted an 18% sales gain.

FCA said its latest analysis of sales under a new methodology “in aggregate correct a small under-reporting” of actual deliveries to customers during 2011-2016 included adjustments of less than 3.4% in any single month; 0.6% in any single year and 0.04% over the entire period.” FCA was booking as sales what were vehicles that actually remained in dealerships as subsidized loaners or demonstration units. The SEC is investigating. (FCA Sales Reporting Crisis has Broad Industry Implications)

Ford F-Series, Dodge Ram, and Chevrolet Silverado pickups one again took the first three places. Honda CR-V in fourth was once again the top international brand pick for U.S. buyers, with sales for the compact SUV at 31,884 units—up 6.5% from last September.  Toyota RAV4 and Nissan Rogue were also popular with American shoppers looking for an crossover SUV in September. RAV4 finished the month in seventh place with sales up 8.6%. Rogue landed in tenth place with sales up 5.6%.

Ken Zino is an auto industry veteran with global experience in print, broadcast and electronic media. He has auto testing, marketing, public relations and communications expertise garnered while working in Asia, Europe and the U.S.
View all posts by Kenneth Zino →
This entry was posted in sales and tagged aiada, autodata, autoinformed, autoinformed.com, Ken Zino, September U.S. light vehicle sales. Bookmark the permalink.