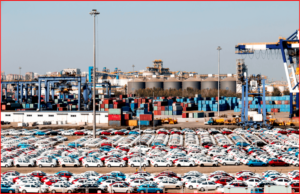 Trade and viruses are global.

China exported 680,000 Passenger Cars in both 2018 and 2019, says Alan Kang, Senior Market Analyst at LMC Automotive Consultancy. “If we compare this volume with total domestic production of 21 million units last year, there is no denying the limited scale of Chinese vehicle exports, at just 3% of total output in 2019,” he observes.

Although export volumes were stable in the last two years, the sector has experienced significant structural shifts. In 2019, non-Chinese brands accounted for 38% of the export market, compared with 30% in 2018. Data for 2010 and 2016 show that overseas OEMs accounted for just 11% and 19% of China’s exports, respectively. These figures, says LMC,  indicate the growing proportion of vehicles built in China by foreign automakers being shipped overseas.

Some brands, of course, already have a long-established history of exporting from China. GM has been shipping Chevrolet, Buick and Cadillac products from China to the US market for years. Volvo uses it Chengdu and Daqing plants as export bases for global markets.

For other OEMs exporting vehicles from China may be a matter of necessity rather than choice. Kia, whose sales in 2019 plunged by 20% to 300,000 units, leaving a vast proportion of its local production capacity of 730,000 units un-utilized. The Korean automaker soon put the idle capacity to use and shipped 50,000 units of locally built vehicles to overseas markets last year.

The implementation of CAFC regulations and the New Energy Vehicle (NEV) dual-credit policy in April 2018 had an important impact on the operational and production activity of automotive enterprises in China.

“The new measures effectively forced automakers to manufacture a certain volume of NEVs in order to qualify for the mandatory number of credits. As these policies were being rolled out, the government simultaneously lifted the industry’s foreign equity restrictions, thus allowing overseas companies to operate more freely,” said Kang.

When combined with China’s relatively low labor costs and mature industrial chain, the effect of these changes is to encourage foreign OEMs to invest greater resources in China, thus boosting NEV manufacturing. But not all of the output volume was destined for local sales as OEMs soon recognized the advantages of exporting these vehicles to markets beyond China.

The impact of increasing trade protectionism is also forcing  in overseas companies to set up manufacturing bases in China. “It appears that the way is being paved for China to be become a global export base for international auto brands by 2025,” concludes Kang.