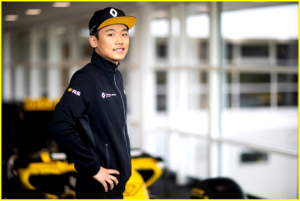 Renault Sport Racing says upcoming Chinese driver Ye Yifei is the latest Renault Sport Academy recruit. The announcement was confirmed at the Shanghai International Circuit in a media and VIP event on the eve of the Chinese Grand Prix weekend.

The 18-year-old, who hails from Xian, China is claimed to be one of the most promising stars of the junior categories. In 2019 Yifei will race for Hi-tech GP in the FIA Formula 3 Championship. Yifei started karting aged ten, taking two national titles. At 14, he made the move to Europe and single-seaters. In 2016 Yifei became the first Chinese driver to win an international title winning  the French F4 championship with 14 wins, 17 fastest laps and 10 pole positions.

More records followed in 2017 with a move to the Formula Renault Eurocup championship and Formula Renault NEC. In 2018 Yifei finished third in the Eurocup, taking two wins, 10 podiums, one pole position and three fastest laps.

“We have been watching Ye Yifei for some time. He has impressed us with his results in all categories, plus his ability to integrate into any racing or cultural environment,” said Cyril Abiteboul, managing director of Renault Sport Racing. “For us, his future is promising, and we are looking forward to guiding the next stages of his career as he continues his progress through the ranks. We are also pleased to be able to further promote Chinese interests in motorsport along with our partner Renault China and DRAC.”

The Renault Sport Academy (RSA) enters its fourth year and second phase of development in 2019 after a “promising campaign last season.” Launched in 2016, the RSA aims to find and nurture young racing driver talent and progress such prospects through the junior racing ranks all the way to Formula 1. Renault’s goal is for an RSA driver to be in Formula 1 and become world champion with the team.

Anthoine (Arden) and Guanyu (UNI-Virtuosi) will go head-to-head in the FIA Formula 2 Championship this year. Max and Christian (both ART Grand Prix) will race in the new FIA Formula 3 Championship with Victor (MP Motorsport) and Caio (R-ace GP) going wheel-to-wheel in the Formula Renault Eurocup.