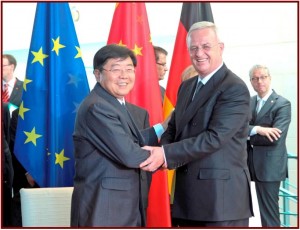 Each of the two JV plants will be designed for an annual capacity of 300,000 vehicles.

The Volkswagen Group can build two more automobile plants in China with the required Chinese companies as partners it was announced yesterday during German-Chinese government meetings in Berlin.

The factory at Yizheng, in Jiangsu Province in eastern China, is to be developed together with partner Shanghai Volkswagen, and the plant at Foshan, in Guangdong Province in southern China, will be built together with the FAW-Volkswagen joint venture. The first documents for the development of the two sites were signed in the summer of 2010.

“China is already the world’s largest sales market for automobiles and further substantial growth is expected in the future,” Dr. Martin Winterkorn, Chairman of the Board of Management of Volkswagen  said during the signing the contracts at the Federal Chancellor’s Office in Berlin.

“The Volkswagen Group intends to play a major role in shaping this growth with new environmentally compatible models and the expansion of local production capacity. Our new plants show that Volkswagen remains a strong motor for the Chinese automobile industry.” Winterkorn said.

Each of the two plants will be designed for an annual capacity of 300,000 vehicles and production is due to start in 2013. This means that VW and its partners will increase annual production capacity in China to three million vehicles.

Volkswagen had previously boosted its investment program for China to €10.6 billion for the period from 2011 to 2015. In addition to the two new plants, plans have already been announced to expand production capacity at each of the existing Nanjing and Chengdu plants to between 300,000 and 350,000 vehicles per year.