Chrysler Execs to Move into Detroit for the First Time 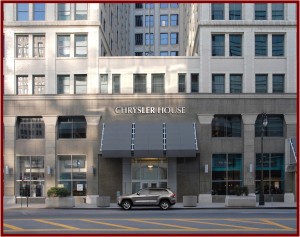 Chrysler has a long-standing manufacturing presence within Detroit.

Chrysler Group will rename the old Dime Building in Downtown Detroit “Chrysler House” and move its Great Lakes Business Center and several corporate functions into the top two floors of the 23-story building. It is the first time Chrysler has had executive offices in downtown Detroit.

Chrysler is leasing nearly 33,000 square feet of space and, after it’s refurbished, about 70 people will move in. It’s largely a symbolic gesture now, but it’s important for the city of Detroit and the comeback car company that many had left for dead.

“It’s a name that reflects our intent to put down roots in Detroit’s downtown and to take a proactive role in building the neighborhood,” said Sergio Marchionne, Chairman and CEO of Chrysler Group.

Chrysler has a long-standing manufacturing presence within Detroit. It is in the process of reopening the Conner Avenue Assembly Plant in Detroit to manufacture the next-generation SRT Viper, shown earlier this month at the New York Auto Show.

Chrysler also operates the Mack Avenue Engine Complex on St. Jean Street and the Jefferson North Assembly Plant, which builds the Jeep Grand Cherokee and Dodge Durango. In 2013, Chrysler will begin preparing the plant to build a Maserati SUV off the successful grand Cherokee. Earlier this year, Chrysler said it would add a third crew and 1,100 new jobs at Jefferson North in early 2013. It has now pulled ahead the third shift to November of this year.