Chrysler, Ford and GM Post Best U.S. May Sales in Years. But… 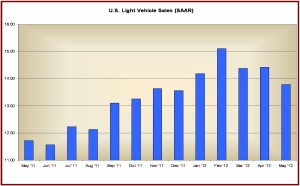 With more than 2 million sales added on an annual basis compared to last year, only Chrysler Group is outpacing industry growth as GM and Ford lag.

Chrysler, Ford and GM today posted the best May sales in years as the U.S. auto market continued its slow recovery to what looks to be shaping up as a 14 million unit year – the best since the collapse of the economy under the waning years of the Bush Administration. In terms of numbers, GM once again led with sales of 245,000 light cars and trucks – its highest in 33 months, followed by Ford Motor (209,000) and Chrysler Group (150,000).

Chrysler, the weakest member of the Detroit Three, has just started production of the Dodge Dart in the compact segment where it hasn’t been present since the Neon in the 1990s. The Group’s strongest selling car is the Chrysler 200 midsize sedan (13,000) and the large Dodge Avenger (11,000). Chrysler in compensation for its neglect of cars – is alone among the Detroit Three with minvans as Frod and GM were driven from the field in a rout by the Japanese. Chrysler continues to have strong sales of minivans,  split between the Town & Country (10,000) and the Dodge Caravan (12,000).

All told, it was the Chrysler Group’s best sales in the month of May since 2007. Moreover, it should be noted that the Fiat 500, written off by many pundits after its slow sales start last year, posted sales of more than 4,000 units.

Ford is scrambling to keep up with market growth, and by end of 2102 Ford will have added 400,000 units of additional capacity in North America, and it looks like it will still lose share, and maybe the Number Two U.S. sales spot to Toyota Motor Sales if the market keeps expanding.

Ford is in the process of converting plants to build the new 2013 Fusion and Escape as well as the Lincoln MKZ. Ford is capacity restrained and during May it could have sold more of ‘high demand” vehicles such as the Ford Fusion.