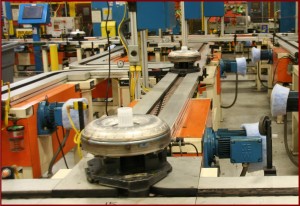 The Jeep Cherokee, finally with front-wheel-drive versions, could easily double the sales of the outgoing 4×4 only Liberty model.

Chrysler Group announced today that it would invest $19.6 million in its Toledo Machining Plant in Perrysburg, Ohio to increase capacity of the torque converter it is making for the nine-speed transmission of the 2014 Jeep Grand Cherokee.

Cherokee is a mid-size SUV that will be the first offering from the famous off-road brand, which will use a Fiat-derived platform. When it goes on sale this fall, the 2014 Jeep Cherokee will debut three four-wheel-drive systems, a 9-speed automatic transmission and a new 3.2-liter Pentastar V6 engine with 4,600 pounds of towing capacity. There is also 2.4-liter “Tigershark” MultiAir four-cylinder that will deliver a 45% fuel economy improvement compared to the outgoing and slow selling Liberty model.

The investment covers the cost of new equipment and tooling for additional machining and assembly capacity; and will begin in Q3 of 2014. With this announcement, the Fiat-controlled Company’s total investments in its U.S. operations since June 2009, after a controversial taxpayer subsidized bailout, totals more than $5.2 billion.

The new torque converters will be part of the next generation, fuel-efficient nine-speed front-wheel drive transmission being assembled at Chrysler Group’s Indiana (Kokomo) Transmission Plant I. The new transmission will debut in the 2014 Jeep Cherokee and spread across the lineup, complimenting eight speed automatic transmissions that are in some Dodge and Ram applications. Neither GM nor Ford has anything this advanced in production, although have recently announced plans to move away from their widespread use of 6-speed automatic transmissions.

“The new nine-speed transmission is a critical part of our strategy to meet fuel economy requirements over the next several years and Toledo Machining will play an integral role in bringing this transmission to market,” said Scott Garberding, Senior Vice President, Manufacturing, Chrysler Group LLC.

In August 2011, a $72 million investment in Toledo Machining was announced to modernize the plant to produce the eight- and nine-speed torque converters on two new production lines and a new steering column for the Dodge Dart and Jeep Cherokee. These installations will be complete in the third quarter this year.