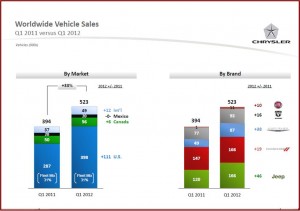 “We continue to deliver on the targets in our five-year plan and are now focused on successfully launching the Dodge Dart."

“I have really no bad news to tell you,” said Sergio Marchionne, Chairman and Chief Executive Officer of Chrysler Group. “We continue to focus on new product launches, and 2012 is the weakest year for new products. The big one is 2013.”

Chrysler Group achieved its third and final U.S. Treasury Department performance goal under the terms of the $12.5 billion bankruptcy loans in January 2012 by committing to produce the fuel-efficient Dodge Dart from an Alfa Romeo platform. Fiat S.p.A.’s ownership of Chrysler is now 58.5%, with union health care trusts (VEBA) holding the balance. Marchionne said that Chrysler has no intention to purchase VEBA equity. Treasury has written off $1.3 billion of U.S. taxpayer money after $11.2 billion of the bankruptcy loan was repaid.