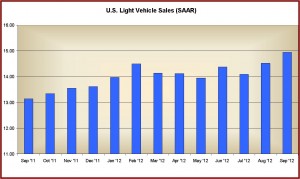 Among the Detroit Three only Fiat controlled Chrysler, the weakest of the group, is keeping pace with the rate of growth of the slowly recovering U.S. auto market.

Chrysler Group reported U.S. sales of 142,041 units, a 12% increase compared with sales in September 2011 (127,336) – the group’s best September since 2007 before the reckless practices of Wall Street collapsed the housing market and the economy. Of the Detroit Three automakers, Chrysler put in what was, arguably, the best performance of the month by nearly matching the overall industry growth rate of 13%. September was the Chrysler Group’s 30th-consecutive month of year-over-year sales gains. Year-to-date, the Fiat-controlled Group far outperformed the market with a 24% increase in sales (1.25 million) compared to a slowly recovering auto industry, which was up 14.5% at 10.9 million light vehicles.

The Chrysler, Jeep, Dodge, Ram Truck and Fiat brands each posted year-over-year sales gains in September compared with the same month a year ago. The Fiat brand’s 51% increase to 4,200 was the largest sales gain of any Group brand for the month, albeit from a baseline figure that was as small as the 500 itself.

The Group’s strength – and potential Achilles’ heel, once again – remains how well it does at  selling trucks, minivans and Jeeps, which comprised 62% of September sales. Many of these vehicles are without significant global growth prospects that are badly needed to bolster profits and reinvest in new technologies. Chrysler computes sales differently, saying it sold (in round numbers) 100,000 trucks and 42,000 cars in September. This might change – if  – the newly added Dodge Dart compact can increase its sales cadence in the thriving compact car market from its current rate of 5,000 units monthly as production “ramps up” at the Belvidere, Illinois assembly plant.

“Going forward with our current product line up, record low interest rates and a stable U.S. economy, we remain optimistic about the health of the U.S. new vehicle sales industry and our position in it,” said Reid Bigland, President and CEO – Dodge Brand and Head of U.S. Sales, who does not hold sales results press conferences.

Six Chrysler Group models set sales records in September. The Chrysler 200 (10,000) and Dodge Avenger (8,800) mid-size sedans each set records with Avenger up 89% sales compared with the same month a year ago. Two Jeep models – Wrangler (12,000) and Patriot (5,400) – set September sales records. In addition, the Dodge Journey (7,600 +41%) set a sales record for the month of September in the crossover segment. Other strong selling models in September were the flagship Jeep Grand Cherokee with sales up 19% at 12,500, and the Dodge Grand Caravan with a sales gain of 32% at 13,400.