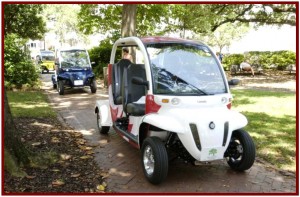 Since 2000, Chrysler has offered the best-selling street-legal electric vehicle in the U.S., the GEM.

Chrysler Group said today that it will sell all of the assets of its Global Electric Motorcars (GEM) and New Electric Vehicle (NEV) subsidiaries to Polaris Industries, Inc.(NYSE: PII), maker of snowmobiles, and all terrain vehicles, in approximately 60 days.

The neighborhood electric vehicles (NEV) or EVs were touted as key to Chrysler’s zero emissions strategy when GEM was founded in 2000.

Classified as Low Speed Vehicles (LSV) or Neighborhood Electric Vehicles (NEV) by the National Highway Traffic Safety Administration, the GEM vehicle line is street-legal in most states on roads posted 35 mph or less.

In practice the glorified golf carts provided good transportation in gated communities, sports stadiums or campuses, but with a top speed of 25 mph and a range of 30 miles on a charge GEM electric vehicles were limited to niche markets. Nonetheless, Chrysler estimates that it sold 45,000 of the EVs during the last decade.

In a terse statement Chrysler said is “continuously evaluating strategic requirements in the rapidly changing regulatory environment for alternative propulsion vehicles. GEM has contributed significantly to Chrysler’s ongoing Zero Emissions Vehicle (ZEV) compliance activities in California and the other Mandate States. Chrysler will pursue a range of other ZEV options moving forward, focusing on full-function EVs.”

Translation: There’s a small future, and limited taxpayer subsidies likely in this business going forward, so it’s time to bail out. Look for plug-in hybrids and full-speed electric vehicles from Chrysler or Fiat going forward because that’s where the subsidies and CAFE credits are now.

Minnesota-based Polaris had sales of almost $2 billion in 2010. North Dakota based GEM had sales of $30 million.