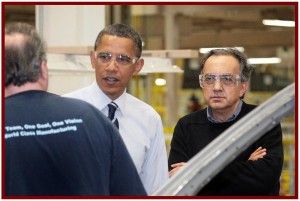 When President Obama took office, the U.S. auto industry was on the brink of collapse. Things are better now.

Chrysler Group and the UAW confirmed today that a new Chrysler UAW national labor agreement, covering 26,000 employees, has been ratified by the UAW-represented workforce in the U.S.  A slight majority of Chrysler UAW workers voted to approve a new four-year contract, with more than 45% voting against it.

The tentative agreement includes $4.5 billion to produce new and upgraded vehicles and components by 2015 and Chrysler Group “may add up” to 2,100 new jobs.

As was the case with newly ratified UAW contracts at GM and Ford, a large part of the Chrysler UAW deal – in this case, $3.4 billion of  claimed new investment of $4.5 billion – was part of previously announced business plans after Chrysler emerged from a controversial taxpayer-supported bankruptcy and reorganization in 2009.

“It’s not everything our members deserve, but we did the best we could in these uncertain times and negotiated an agreement that will ensure Chrysler’s viability so that we can share in its economic success once it has regained financial stability,” said UAW Vice President General Holiefield.

This is a major victory for Sergio Marchionne, CEO of the Italian-controlled company, who was determined to hold the line on costs, which because of the U.S. government forced bankruptcy in 2009 are at $49 an hour – competitive with non-union auto plants.

Investment and product guarantees in the tentative agreement include:

Here are the details of the agreement and a complete list of plant investment.

The UAW represents 26,000 employees at Chrysler, including 3,000 salaried employees, at 48 Chrysler facilities in the United States, making vehicles and components with the Chrysler, Jeep, Dodge, Mopar and Ram Truck brands.