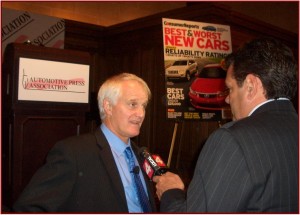 “There’s a difference between sitting in the showroom and driving the car… any button should be a single function… taking your eyes off of the road for two seconds or more greatly increases your safety risk,” according to Champion. NHTSA and University of Virginia Research affirm the assertion.

Chrysler Group, the smallest and weakest of the Detroit Three – saw its Jeep brand improve seven spots to 13, becoming the most reliable domestic brand, and all its models for which Consumer Reports has sufficient data scored average in predicted reliability. Chrysler and Dodge moved up 12 and three spots in ranking, respectively.

General Motors did not build on last year’s trend of improvement. The Buick and Cadillac brands, in particular, went backward, according to David Champion, Auto Test Director of the independent, non-profit organization. Chevrolet held steady and GMC dropped one spot. The new Buick Regal and Chevrolet Cruze were below par in reliability. The Buick LaCrosse, an all-wheel-drive version of the Buick Enclave, and the Cadillac SRX were all deemed reliable last year, but dropped to below average and are no longer recommended.

Ford slipped badly as three of its new models – Explorer, Fiesta, and Focus – all had below-average reliability in their first year. As a result, Ford’s overall reliability rank among 28 major car makes slipped from the 10th to the 20th spot this year—the biggest drop for any major nameplate in Consumer Reports 2011 Annual Auto Survey.

“We have often found that new or revamped models have more problems in their first year than in subsequent model years. Ford’s problems illustrate why we recommend to our subscribers to hold off buying a first-year model,” said Champion.

Ford’s drop can also be attributed to problems with new technologies: the new My Ford Touch infotainment system and the new automated-manual transmission used in the Fiesta and Focus. Lincoln finished above Ford, although the freshened MKX, a cousin of the Edge, suffered from the My Lincoln Touch system. The Ford Fusion Hybrid sedan remained outstanding, and other Fusion versions were above average.

Even with Chrysler’s improvement, Detroit models still have reliability problems. Of the 97 domestic models and versions for which Consumer Reports has sufficient data, 62 (64%) rated average or better in CR’s new-car reliability ratings, which means more than one-third did not. 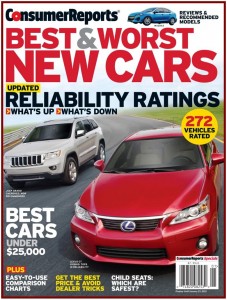 CR averages the overall reliability scores (used car verdicts) for the most recent three model years, provided that the model remained unchanged in that period and also didn’t substantially change for 2012.

Price has nothing to do with reliability. With Jaguar at the bottom and Scion at the top,” said Champion, “you don’t always get what you pay for.”

Overall, European vehicles’ reliability is remains below that of Detroit Three models. Of the 58 European models for which Consumer Reports has sufficient data, 37 (64%) scored average or better in predicted reliability. Among European brands, Volvo ranked the highest at 10th overall. It was helped by the redesigned S60, which was above average in its first year.

Volkswagen was able to hold on to 16th place in the ranking; seven of its 11 models scored average or better. Mercedes-Benz and BMW improved, but results were inconsistent for their various models. BMW’s redesigned X3 SUV did well, but the redesigned 5 Series sedan was well below average. Mercedes’ compact GLK SUV improved, but its flagship S-Class luxury sedan fell to below average.

Porsche also dropped from being the second-best brand last year to the second-worst. That big shift occurred because CR has data for only two models, one of which, the redesigned Cayenne SUV, had a terrible debut year.

Jaguar trails the pack. Its XF and the new XJ were the two least reliable new cars in the survey, but that’s not surprising, given Jaguar’s history, according to Champion.

Full reliability history charts and predicted-reliability ratings on hundreds of 2012 models, plus a list of what’s up and what’s down, best and worst models, and a comparison chart of brands can be found online at www.ConsumerReports.org, in the December issue and in the latest Consumer Reports Cars publication, Best & Worst New Cars for 2012 ($7.99 U.S./$8.99 Canada), on sale November 15, 2011 everywhere magazines are sold.