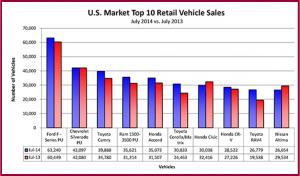 Incentives, cheap money and a recovering US light truck and crossover market kept July sales hot as 1.435 million light vehicles were peddled, an increase of 9.1%. All of the Detroit Three benefited, particularly Chrysler, but ironically, it was the Asian brands with growing truck and crossover sales that benefited the most.

At a SAAR – Seasonally Adjusted Annual Selling rate of 16.48 million (July ’13 was 15.76m), there is enough business for all major makers. Overall incentives were up 8% from July 2013, averaging $2,774 per vehicle, according to AutoData.

The crepe hangers looking for a sales decline at legally beset GM were once again disappointed as the Number One US automaker posted a 9.4% gain at 256,000 units.

Once Number Two Ford Motor – in the midst of a complicated and complex changeover to heavily revised models, sold 212,000 vehicles – 143,000 of them trucks. This was not a good enough Ford performance to fend off Toyota Motor Sales, which slipped past FMC into Second Place with sales of 216,000, an 11% gain y-o-y. Moreover, Toyota was the Number One retail brand in July. Toyota light trucks post best-ever July, up over 15%. The all-new RAV4 was up 37%, its best-ever month.

Chrysler also had a lavish float in the July parade. Its Jeep brand sales were up 41% – the best July sales ever. Ram pickup truck sales increased 14%, the best July sales since 2005. “Chrysler Group had a solid July as each brand recorded sales gains on our way to a 20% year-over-year increase, our strongest July sales in nine years,” said Reid Bigland, head of US sales.

In the all-important Top Ten Seller list, offshore brands took seven spots, up from five in June. No Surprise that the Ford F-Series continued its sales leadership, followed by the Chevrolet Silverado pickup truck. Toyota Camry was a close third, edging out the Dodge Ram. In fifth, was the Honda Accord, which might be able to overtake the Ram? Six was Toyota Corolla. Next, Honda Civic and CRV, as Toyota Rav4 and Nissan Altima filled out the Top Ten list – not a Detroit Three passenger vehicle anywhere.

In third place, and with sales up 14.7% over last July, the Toyota Camry led the car sales pack and maintained its lead as the top selling car in the US Toyota and Honda made the strongest showing on the month’s top ten list with three models each. The Camry was joined by the Toyota Corolla (up 26%) and RAV4 (up 37.1%),  captured sixth and ninth places, respectively, as noted. Honda’s three models – the Accord (up 11.3%), Civic (down 7.3%), and CR-V (up 4.8%) held occupied the fifth, seventh, and eighth spots. At number ten, the Nissan Altima (down 9.8%) rounded out the list.

Ken Zino is an auto industry veteran with global experience in print, broadcast and electronic media. He has auto testing, marketing, public relations and communications expertise garnered while working in Asia, Europe and the U.S.
View all posts by Ken Zino →
This entry was posted in results and tagged autodata, autoinformed, autoinformed.com, Ken Zino, top ten sellers. Bookmark the permalink.