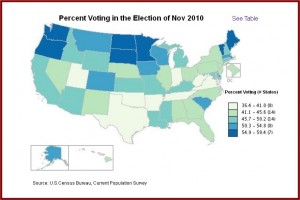 In 2010, the percentage of eligible citizens who voted in the United States was 46%.

The Census Bureau today released a menu-driven, interactive web page giving users access for any state a series of graphs or voting maps showing the percentages of adults who voted in every congressional and presidential election between 1996 and 2010.

Some analysis of the 2010 election is provided as well, as are thematic maps of states showing percent voting during each election. The statistics come from the Current Population Survey. See http://www.census.gov/hhes/www/socdemo/voting/index.html