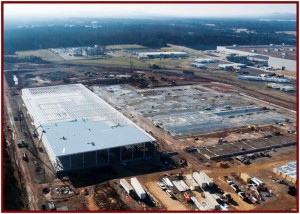 Leaf is initially is being produced in Oppama, Japan.

Construction is progressing on Nissan’s new manufacturing facility in Smyrna, Tennessee, which will produce lithium-ion batteries for the Leaf electric vehicle. Nissan says the foundation is finished and the structure and roof are being installed for the plant, which at full capacity can produce 200,000 batteries annually.

It is located next to Nissan’s vehicle assembly plant, which is being retooled to build as many as 150,000 Leaf electric vehicles annually – if customer demand is there when it opens in 2012.

The construction of the battery plant and modification of the Smyrna manufacturing facility  is subsidized by taxpayers through a U.S. Department of Energy loan for 80% of the investment, up to $1.4 billion of about $1.7 billion.

The loan was issued as part of the Advanced Technology Vehicles Manufacturing Loan Program, a $25 billion program authorized by Congress as part of the Energy Independence and Security Act of 2007.

The program is designed to accelerate the development of vehicles and technologies that increase U.S. energy independence, create cleaner means of transportation and stimulate the American economy.

Leaf is initially is being produced in Oppama, Japan, and has lithium-ion batteries being produced in Zama, Japan. Sales of the Leaf EV began in select markets in the United States in December 2010. Leaf will be available nationwide in 2012. Nissan reports that Leaf deliveries are slow but increasing weekly. The first shipment was small, additional shipments from Japan increase in size.

The Oppama plant has produced about 3,000 Leaf’s so far. Oppama will be up to 10,000 by end March. Full speed is about 4,000 per month and Oppama will be capable of doing that in March.

The Renault-Nissan Alliance also will produce lithium-ion batteries in Cacia, Portugal, and Sunderland, UK, as well as in Renault’s Flins plant in France.

Combined, Nissan Leaf and battery production will create 1,300 U.S. manufacturing jobs when the plants are operating at full capacity, according to Nissan.

“Nissan is making significant strides to be one of the largest producers of electric vehicles and batteries in the United States,” said Carlos Tavares, Chairman, Nissan Americas. “We applaud President Obama’s goal of bringing 1 million electric vehicles to U.S. roads by 2015 and look forward to doing our part to ensure that many of those vehicles, and the batteries that power them, are built in the United States.”