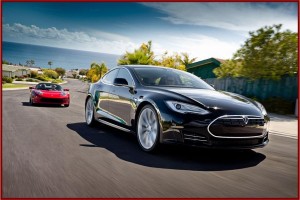 With Tesla under investigation by the National Highway Safety Administration for a fatal accident in May of a 2015 Model S and a tractor trailer, Consumer Reports is saying Tesla should disable and update the new-for-2015 autopilot steering and automatic braking functions.  Heretofore, CR gave the Model S from the fledgling car company a “much better than average” reliability rating for 2015, and the observation that it was the “best electric vehicle.” The dead driver was allegedly watching a Harry Potter movie. CR praised the giant 17-inch “iPad like” center screen.

In June, NHTSA internally opened “Preliminary Evaluation PE16-007 to examine the performance of the Automatic Emergency Braking (AEB) system and any other forward crash mitigation or forward crash avoidance systems enabled and in use at the time of the fatal crash. including any design changes and updates to the system, as well as detailed logs of when the system has prompted drivers to take over steering.”

NHTSA told Tesla last week it wants to know about all crashes alleged to have occurred because Forward Collision Warning (FCW) or Automatic Emergency Braking (AEB) did not occur when expected.

NHTSA also wants to know about all of Tesla’s “past and present officers and employees, whether assigned to its principal offices or any of its field or other locations, including all of its divisions, subsidiaries (whether or not incorporated) and affiliated enterprises and all of their headquarters, regional, zone and other offices and their employees, and all agents, contractors, consultants, attorneys and law firms and other persons engaged directly or indirectly by or under the control of Tesla who are or, in or after January 1, 2000, who were involved in any way with the following:

The Securities and Exchange Commission is also reportedly investigating about whether Tesla failed to tell investors about the crash in a timely fashion. The SEC is silent on the matter at this time.

Ken Zino is an auto industry veteran with global experience in print, broadcast and electronic media. He has auto testing, marketing, public relations and communications expertise garnered while working in Asia, Europe and the U.S.
View all posts by Ken Zino →
This entry was posted in distracted driving, safety and tagged autoinformed, autoinformed.com, Ken Zino, nhtsa, tesla investigation. Bookmark the permalink.