Corvette Wins at Laguna Seca. Just Points Ahead of GT40 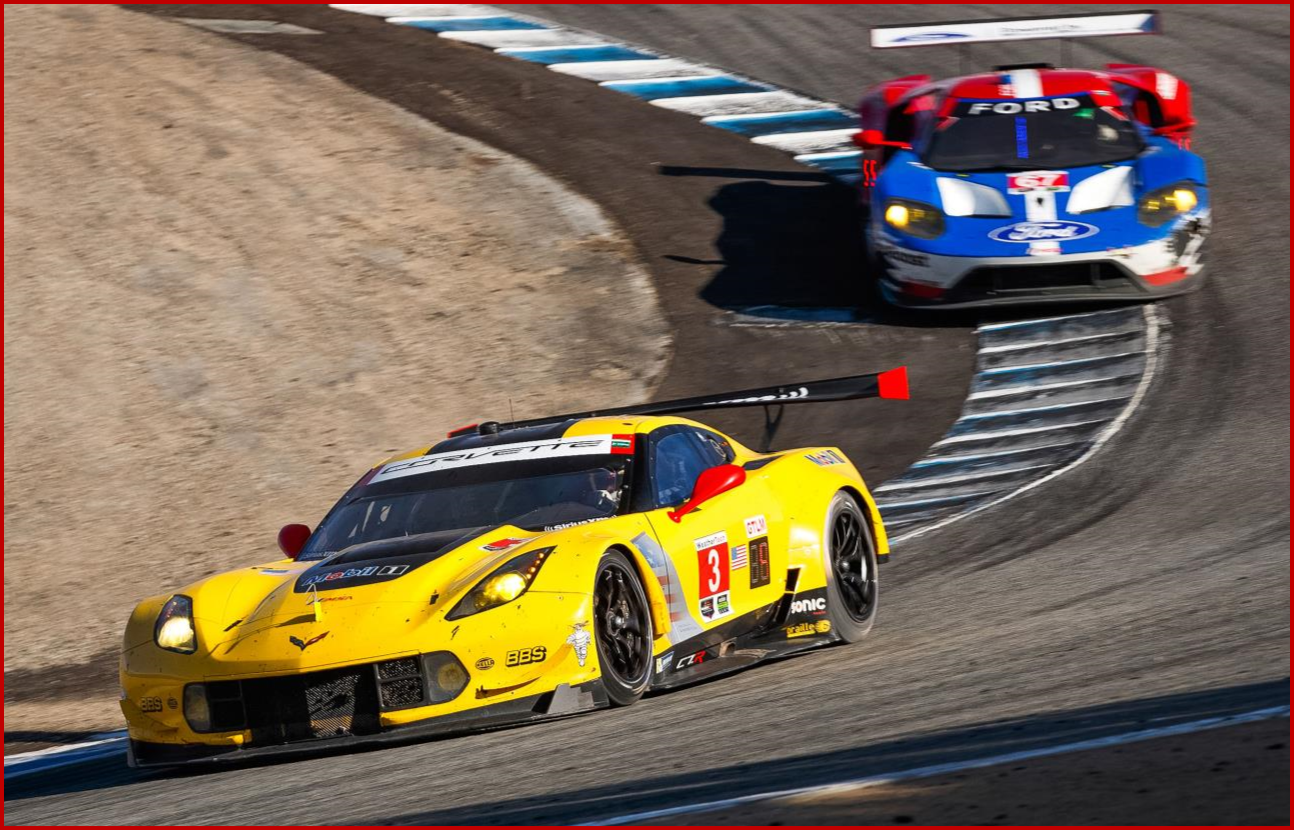 Corvette drivers Magnussen and Garcia lead the Driver’s Championship heading into the final race of the year at Road Atlanta. Anything can happen.

Sports car racing is a bit like the ‘restaurant row phenomenon” where multiple establishments in proximity – in this case fender-to-fender or exhaust-to-front bumper kissing at racing speeds – allows all to thrive in a cacophonous street and track democracy. This is where you ‘run what you brung’ machines that are legal on the track. And the street legal versions of these cars have never been so edgy, so close to the pro versions – particularly in the GT classes – roaring proof of a performance heaven on earth.

The No. 3 Mobil 1/SiriusXM Chevrolet Corvette C7.R driven by old pro Jan Magnussen and an experienced Antonio Garcia, raced to a fourth-place finish in the GTLM division Sunday, 24 September 2017 during the IMSA SportsCar Championship Monterey Grand Prix at Laguna Seca in Salinas, CA.

Magnussen and Garcia lead the Driver’s Championship heading into the final race of the year at Road Atlanta in two weeks. In the manufacturer’s championship, it’s anybody’s guess as to what will happen in the last race. It looks to be a good old (anachronistic) “Merican Chevy versus Ford paint swap with BMW, Ferrari and Porsche as collateral damage – or at least they hope so.

The Bow Tie and Blue Oval are not the only brands ‘Prancing’ on sports car tracks that are as storied and famous as the ghosts of the drivers and their cars that still haunt them – Daytona, Sebring, Watkins Glen, Laguna Seca, to name only some. Both Ford and Chevrolet are committed to the IMSA series, the inheritor of some of the finest, and toughest, racing in the global history of fearsome competition cars that do more than just turn right or shut down in the pits during a red-flagged rain delay or cancellation.

Moreover, they are doing quite well waving a fuel-injected American flag, particularly Corvette because of its longevity in sporting racing livery. Ford is more fickle – seriously racing when an owner or the occasional senior exec –  H Ford 1 and  H Ford 11 come to mind – have the urge, or when marketing wakes up (FMC’s Bob Rewey is dearly missed here) and finds itself in the car business where performance sells, pedigree counts and victories lead to more than trophies but sales built on grease-smeared reputations.

“It’s a plus for the American manufacturers’ image,” said Dave Pericak, director of Ford Performance. Especially since the Ford GT and Chevrolet Corvette compete against celebrated brands in the sports car world, including Ferrari, Porsche and BMW.

Ford’s presence “further proves the value of sports car racing to major manufacturers,” says Doug Fehan, program manager for Corvette Racing since it debuted in 1999. “The automotive world is full of rivalries, but it doesn’t get any better than having Chevrolet battle Ford at the front of the pack.”

Ditto – at least on this side of the Atlantic.

Aston Martin, BMW Porsche and Ferrari have slightly different view – all will be on display at speed at Road America.

Instead of a fading NASCAR series that runs decal covered spec racers to make them look like what they decidedly ain’t, sports cars cover a lot of ground  quickly while turning left, right, moving up ‘n down with elevation changes and charging into blind curves. They also run, and run hard in the rain.