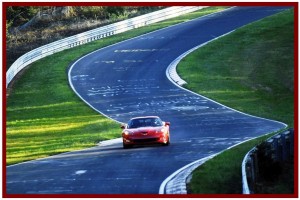 Chevrolet previously announced that its 2012 Z06 and ZR1 models with optional Michelin tires are capable of more than 1.1g in lateral acceleration, the highest ever for the revised sports car.

A 2012 Corvette ZR1 posted a lap time of 7:19.63 at Germany’s Nürburgring. This was more than six seconds faster than the previous Corvette-best recorded in 2008. As was the case at Corvette’s last test in 2008, the new ZR1 was driven by Corvette engineer Jim Mero and was a production model with no performance modifications.

With 154 turns around the 12.9 mile (20.8 km) course, the Nürburgring Nordschleife (“north loop”) is used by performance car makers to bolster marketing claims. Click here for in Corvette video.

“Testing at the Nürburgring is one of the important methods we have to validate our car in the toughest track conditions,” said Tadge Juechter, Corvette vehicle line director and chief engineer.

This test was conducted to publicize the car’s added technology coming to production later this summer for the 2012 model year, Chevrolet said in a release.

Chevrolet previously announced that its 2012 Corvette Z06 and ZR1 models with optional Michelin tires are capable of more than 1.1g in lateral acceleration, the highest ever for the revised sports car.

Testing at Virginia International Raceway demonstrated, according to a previous 2012 Corvette release, an improvement of approximately three seconds per lap when the cars are fitted with the new optional Michelin Pilot Sport Cup Zero Pressure tires, which are available on the two highest-performing models, the lightweight, 505-horsepower (377 kW) Z06 and the maximum-performance, 638 horsepower (476 kW) supercharged ZR1. The Michelins are competition-oriented tires, optimized for warm, dry conditions to increase cornering and handling capability. (See 2012 Corvettes at More than 1.1g Lateral Acceleration!)