Court of Appeals Throws Out EPA Cellulosic Mandate for Refiners 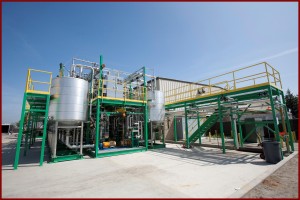 This pilot plant has the capacity to convert 2 dry tons per day of feedstock into cellulosic sugars and 50,000 gallons per year of cellulosic ethanol.

The U.S. Court of Appeals in Washington D.C. said yesterday that EPA’s 2012 requirement for refiners to use cellulosic biofuel – or to purchase credits instead – was illegal since no cellulosic ethanol fuel was produced last year that the refiners could blend into gasoline. The decision came from a lawsuit brought by the American Petroleum Institute.

E.P.A. is required by Congress to set increasing levels of cellulosic fuel – made from agricultural scraps, wood and weeds, instead of corn used to feed livestock – to be blended into gasoline and diesel fuel each year.In 2012 about 9% of all fuel was from renewable sources.

When President Bush and the Republicans passed the controversial Energy Independence and Security Act of 2007, EISA, the stated goal was to get to 20% of all fuel used by 2022 to come from U.S.-made renewable fuels to free the U.S. from the ongoing national security and budget issues caused by importing foreign oil from totalitarian and terrorist supporting nations.

While the enabling legislation was noble at least in its publicly stated intent – the U.S. sends over $1,000,000 a minute to oil exporting nations, many of whom are hostile to us – it was in the end a sordid tale of special interests feeding at the public trough. Worse, the legislation dictated the types and amounts of fuel to be used to gain energy independence – in effect a dreaded and ineffective design standard – instead of a performance standard that sets broad goals and lets industry and the marketplace work out the issues.

U.S. taxpayers were handing agribusiness a subsidy of almost $7 billion annually to use corn to make ethanol, that totaled to more than $40 billion in pork – err corn – since the act’s passage. These subsidies are now gone since January of 2012, (a 45-cent a gallon subsidy for ethanol blenders) and a protectionist tariff of 54 cents per gallon was dropped that blocked much more efficient Brazilian sugar-cane derived ethanol, even though using Brazilian ethanol does nothing to help U.S. energy independence.

The federal renewable fuel standard requires EPA to determine the volume of cellulosic biofuels each year at “the projected volume available.” There was no commercial supply of the fuel in 2012, though. EPA’s mandate would have required refiners and importers of gasoline and diesel to pay more than $8 million for credits to cover the 2012 mandate of 8.65 million gallons of the nonexistent biofuels. Only 20,000 gallons of cellulosic fuels were produced in 2012.

“This absurd mandate acts as a stealth tax on gasoline with no environmental benefit that could have ultimately burdened consumers,” said API, the initiator of the lawsuit.

It was only a partial and temporary victory for Big Oil, which may or may not be in promoting energy independence and wants to eliminate the biofuel mandate on alternative fuels. In a narrow decision against API assertions, the Court also upheld that EPA is free to reinstate the volumes that it had established, as long as the information available at the time would support the agency’s conclusion that those volumes were reasonably achievable.

The court also rejected API’s argument that EPA was not entitled to consider information from cellulosic biofuel producers in setting its projection, finding that cellulosic producers were, of course, an “almost inevitable source of information” for EPA.

Virtually every gallon of gasoline sold in the U.S. right now contains ethanol: 98% as E10 – up to 10% ethanol for conventional autos, and 2% as E85 – 85% ethanol/15% gasoline for use in flex fuel vehicles only. The problem remains we are not even currently close to achieving the mandated usage goals even though current projections have ethanol fuel use at more than 14 billion gallons in 2012.