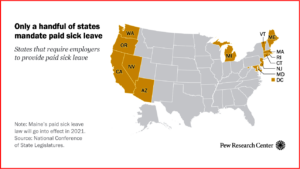 Our friends at Pew Research Center note that one of the key pieces of advice offered by health experts is: If you feel sick, stay home. This begs the question that Pew answers in its latest research report: As coronavirus spreads, which U.S. workers have paid sick leave – and which don’t?. Herewith excerpts from this non-partisan fact tank. As a neutral source of data and analysis, Pew Research Center does not take policy positions.

The U.S. and South Korea are the only two countries in the Organization for Economic Cooperation and Development where paid sick leave is not guaranteed, according to a 2018 report from UCLA’s World Policy Analysis Center. All European Union member countries have some form of paid sick leave, though the details vary.

In the U.S., 12 states and the District of Columbia currently require employers to provide paid sick leave to their workers, according to the National Conference of State Legislatures (Maine joins the list next year).

Staying home for U.S. working people is “a lot easier to do if you have access to paid sick leave – which 24% of U.S. civilian workers, or roughly 33.6 million people, do not, according to the federal Bureau of Labor Statistics,” Pew notes. (Civilian workers refer to private industry workers and state and local government workers combined.)

BLS’ 2019 National Compensation Survey (NCS) found that, for civilian workers, paid sick leave, while nearly universal at the upper ends of the wage distribution, becomes scarcer the less money one makes: 92% of workers in the top quarter of earnings (meaning hourly wages greater than $32.21) have access to some form of paid sick leave, versus only 51% of workers earning wages in the lowest quarter ($13.80 or less). Among the lowest-earning tenth – those whose wages are $10.80 an hour or less – just 31% have paid sick leave. This is socialism for the rich in AutoInformed’s view.

Along with (or instead of) regular paid sick leave, Pew notes that some employers are using other means of helping themselves and their workers get through the current COVID-19 crisis, such as offering ad hoc, temporary sick leave or, when feasible, allowing or requiring people to work remotely.

In the private sector, 73% of workers have access to paid sick leave, but the share varies a lot by what they do and where they work. Nine-in-ten private-sector workers in “management, professional and related” occupations – such as corporate executives, software engineers, bankers and lawyers – have paid sick leave available to them. Coverage levels go down from there.

Only 43% of part-time civilian workers have sick leave benefits available, versus 86% of full-time workers. Most unionized workers (91%) have access to paid sick leave, compared with 73% of non-union workers.

House Democrats have proposed a temporary federal sick leave benefit as part of emergency legislation to address the COVID-19 crisis. Pew’s Drew DeSilver says, “The measure would guarantee workers with the disease or caring for family members with it two-thirds of their wages for up to three month; it would expire in January 2021. The bill also would require all private employers to give their workers seven days of paid sick leave, with an additional 14 days available immediately in the event of “public health emergencies.”