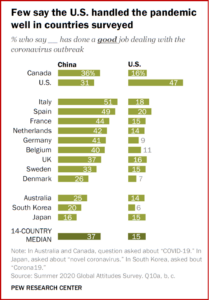 Negative views of the United States and China have risen in many countries during the past year, according to the latest pew Research. In most of 14 advanced economies surveyed between June and August 2020, unfavorable views of both countries are at or near historic highs in Pew Research Center’s decade or more of polling on the issue.

Few in the countries surveyed have confidence in the leader of either the U.S. or China, and many are critical of how both countries have handled the coronavirus outbreak. On most measures included in the survey, people are even more critical of the U.S. than of China. However more still have favorable opinions of the U.S.

Most people have unfavorable views of both China and the U.S. – but more see the U.S. favorably. Many people in every country surveyed have a negative view of China. Outside the U.S., South Korea and Japan, the same is true of the United States. But, in most countries surveyed, views of the U.S. are more favorable than views of China. In South Korea and Japan – two formal allies of the U.S. that neighbor China – this gap is more than 30 percentage points.

Most people rate China more positively than the U.S. in its handling of the coronavirus pandemic. Across the 14 countries surveyed, few praise China’s response to COVID-19, with a median of 37% saying it has done a good job dealing with the outbreak. But, in all countries except Japan and the U.S. itself, people are much more complimentary of China’s response than that of the U.S. In Japan, fewer than one-in-five praise either country.

The gap is largest in Italy, where 51% say China has done a good job compared with 18% who say the same of the U.S., a difference of 33 percentage points. Gaps of around 30 points exist across most of the Western European countries surveyed. 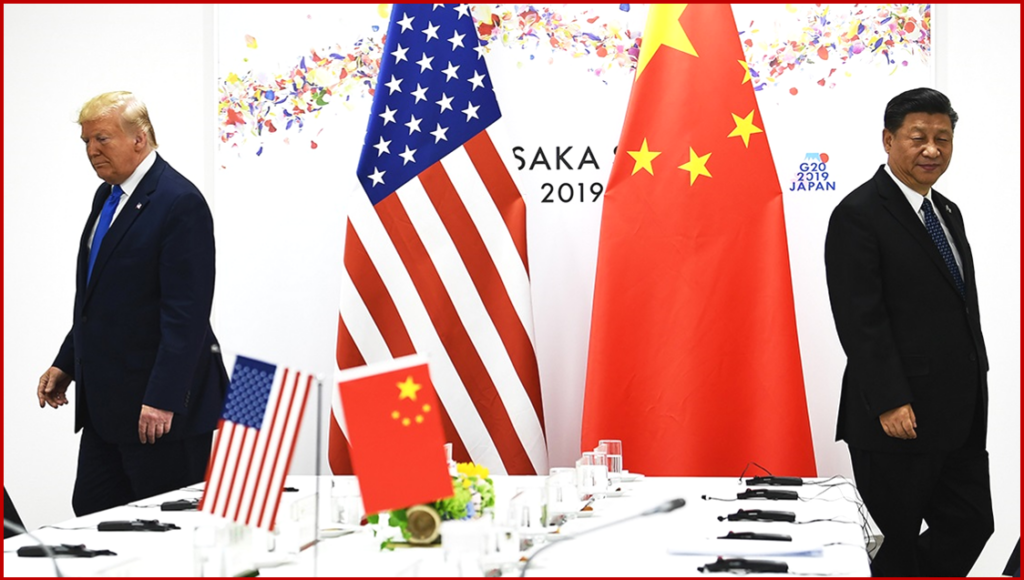 Does it matter how a corrupt leader kills you or his people?

In six countries, similarly low numbers of people express confidence in either leader. But in six Western European countries where the ratings of the two leaders differ, Xi tends to come out on top. For example, in Belgium, 22% say they have confidence in Xi while only 9% say the same of Trump. Only in Japan and the U.S. itself do more people have confidence in Trump than Xi.

More see China as the world’s leading economic power than the U.S. In every European country surveyed, a plurality or majority say China is the top economy in the world. Only in South Korea, Japan and the U.S. itself do more people name the U.S.

Across Europe, these ratings are largely unchanged since 2019 despite the major changes in the global economy brought on by the coronavirus pandemic. Western Europeans have generally considered China’s economy to be the strongest worldwide in recent years, even while people in Central and Eastern Europe, Latin America, Africa and the Middle East – none of which were surveyed this year – have often named the U.S.

This Pew analysis focuses on cross-national views of China. The work builds on Pew studies released in the fall of 2020 on China’s international image, Americans’ views of China and the international image of the U.S. This study was conducted in countries where nationally representative telephone surveys are feasible. Due to the coronavirus outbreak, face-to-face interviewing is not currently possible in many parts of the world. For this report, Pew  use data from nationally representative surveys of 14,276 adults from June 10 to Aug. 3, 2020, in 14 advanced economies. All surveys were conducted over the phone with adults in the U.S., Canada, Belgium, Denmark, France, Germany, Italy, the Netherlands, Spain, Sweden, the UK, Australia, Japan and South Korea. Here are the questions used for the report, along with responses, and the survey methodology.