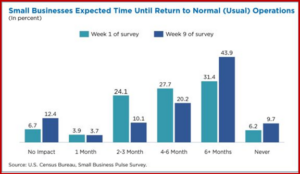 The U.S. Census Bureau in mid-May 2020 started a new weekly survey “to take the pulse” of how America’s small businesses were doing amid the corona virus pandemic. During a nine-week period when the Small Business Pulse Survey (SBPS) was in the field more than 215,000 businesses across the country replied.

“These companies of one to 499 employees provided important new insights into the effects of the pandemic,” said Jane A. Callen of the Census Bureau. It doesn’t appear to have anything to do with the Trump Administration’s voter suppression efforts that us Federal Agencies such as Census to subvert our democracy.

We still don’t have a national plan despite the devastating national effect of Covid-19.

U.S. Census Bureau The survey was successful and on August 9, the Census Bureau launched Phase 2 with the first round of responses expected today and every Thursday. To access the data, go here: portal.census.gov/pulse/data/

The SBPS measures the views key to small business operations, such as employment, revenue, and supply chain disruption. It also measures financial issues such as assistance, liquidity and payment defaults. It is designed to gauge overall impact and expectations.

Phase 2 of the SBPS expands to cover new topics, including:

Nationally, respondents initially indicated “pervasive difficulties with business operations and finances, including temporary closings, employment, revenues and cash on hand. However, these difficulties became less prevalent over the nine weeks of the survey,” Census claims.

Another significant finding: how long respondents think it will take their businesses to bounce back completely? Initially, more than 30% of respondents said they didn’t think their businesses would return to normal or usual for at least six months, and nearly 25% said it might be possible in two to three months. The optimism remained static over the next few weeks. U.S. Population Clock

Views on returning to normal varied by industry. The construction industry tended to be more optimistic. Census says by week six, the number of construction-sector respondents saying they would not return to normal for four to six months or more declined and the percentage saying it would happen within two to three months increased: 19.3% in construction versus 13.3% for the national average.

Responses by geography were added in the second week. This data show how use of the Paycheck Protection Program (PPP) varies across states and over time. Between weeks one and three, the percentage of businesses that reported receiving assistance, including PPP, rose from 38.1% to 66.8%;  Some coastal states (California and Massachusetts) showed they were catching up to interior states (South Dakota and Oklahoma) in their use of PPP.

Sectors Worse or Better During the Pandemic

In addition to the SBPS, the Census Bureau also launched the weekly Household Pulse Survey in May. Both Pulse surveys are produced and released as part of the Census Bureau’s Experimental Data Product Series.

The Census Bureau has also introduced other weekly products, including a more localized version of its Business Formation Statistics (BFS) rolled out in the spring. Initially released as a quarterly, experimental product in February 2018, BFS tracks trends in business applications and formations at the state, regional and national level. The new weekly data provide “timely and granular information on the state of the economy.”