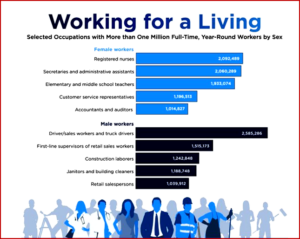 Labor Day 2020 sees the US economy in trouble because of Covid 19 and the bungled federal government response to the ongoing global pandemic. In August, the U.S. economy added 1.4 million jobs according to the  Labor Department, down from 1.7 million in July and down abruptly from the 4.8 million added in June. Workforces are still more than 11 million jobs below their pre-pandemic level.

The unemployment rate fell to 8.4%, down from 14.7% in April and 10.2 % in July (The so-called U-3 measure  is people without jobs who must have looked for a job in the last four weeks). Any way you look at it, joblessness is still higher than the peak of many past recessions. The real unemployment rate was 14.2% because it contains 535,000 discouraged workers. (This is U-6 or the real rate because it includes people who would like a better job. It also includes those who are underemployed and marginally attached.)

Jerome H. Powell, chair of the Federal Reserve, claims that the economy, while slowly recovering, will need extraordinary support for an extended amount of time given the pandemic.

His comments, in an interview with NPR, were at odds to those from the never-never land White House, which claimed the jobs report showed a  quick recovery from the depths of the pandemic recession.

“The economy is now recovering,” Mr. Powell said. “But it’s going to be a long time, we think. We think that the economy’s going to need low interest rates, which support economic activity, for an extended period. It will be measured in years.”

Labor Day, the first Monday in September, is a creation of the labor movement and is dedicated to the social and economic achievements of American workers.

The first governmental recognition came through municipal ordinances passed in 1885 and 1886. The first state bill was introduced into the New York legislature, but the first to become law was passed by Oregon on February 21, 1887. During 1887 four more states — Colorado, Massachusetts, New Jersey, and New York — created the Labor Day holiday by legislative enactment.

On 28 June 1894, Congress passed an act making the first Monday in September of each year a legal holiday in the District of Columbia and the territories.