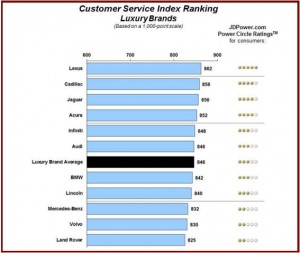 Lexus ranked highest in satisfaction among luxury brands for the fifth consecutive year – 19 points above segment average and the highest score in the study.

Overall customer satisfaction with service at authorized dealerships increased when compared to 2012 as automaker efforts to bolster loyalty among service customers, including decreasing prices for common maintenance items, are showing results.

More than three-fourths (77%) of vehicle owners indicate that their most recent dealer service visit was for maintenance, such as an oil change or tire rotation, an increase from 72% in 2012 and 63% in 2011.

The CSI rankings are based on dealer service performance during the first three years of new-vehicle ownership, which typically represents the majority of the vehicle warranty period. After the warranty expires, dealerships traditionally have little chance of getting maintenance work as more than two thirds of customers then resort to independent repair shops and mass merchandiser tire, transmission, brake and muffler chains. 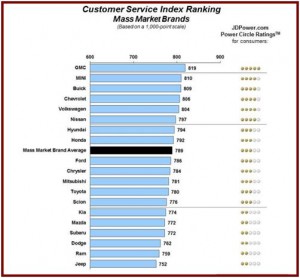 Five of the 19 mass market brands improved index scores by at least 20 points, compared with 2012.

The new J.D. Power study finds that owners visit a dealer service department an average of 2.6 times per year, most frequently for vehicle maintenance. This shift in the proportion of maintenance work to repair work is one of the contributing factors to the increase in overall satisfaction since warranty work by definition means something broke that shouldn’t have.

Five measures are used to determine overall satisfaction with dealer service, listed in order of weighting: service quality, service initiation, service advisor, service facility, and vehicle pick-up. Three of 11 luxury brands and five of the 19 mass market brands have improved in overall satisfaction by what Powers consider significant. “Manufacturers have made large investments in retail programs, and dealers have made significant investments in key customer touch-points—people, improved processes and customer waiting areas—which are having a profoundly positive impact on their customers,” said Chris Sutton of J.D. Power.

“While there are a lot of things dealers can’t control, such as the product and the incentive levels on the sales side, one thing they can control is the service they provide,” said Sutton. “When new-vehicle sales dropped in 2008, dealers increased their focus on service, and that attention on the service customer continues today.”