Toyota Motor Corporation and its wholly owned subsidiary Daihatsu Motor Company are establishing an internal organization that will be responsible for compact vehicles for emerging markets. This is the result of both companies agreeing on roles toward strengthening their compact vehicle operations in emerging markets. The goal is oachieving sustainable growth. Daihatsu’s expertise heretofore is in mini-vehicles – so-called kei cars – not larger compacts, so it’s an expansion for Japanese maker.

Translation: Toyota under intense competitive pressure from global automakers – here Honda, Maruti and Tata come to mind, among others – is experimenting with a different organizational approach to getting mini cars to market. This – potentially – could also change Toyota’s approach and cost basis to compact vehicles in established markets. 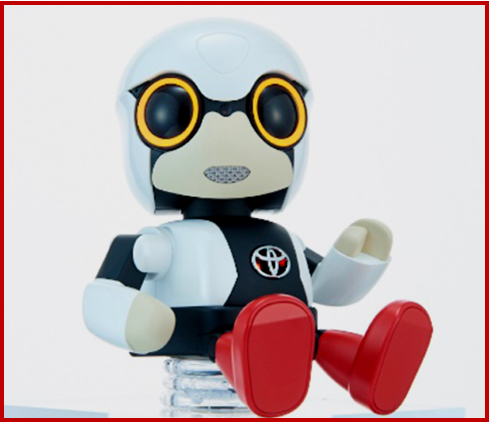 Kirobo fits in a cup holder. Kirobo turns its head toward the person speaking, while engaging in casual Japanese conversation and  moving its hands and changing its tone of voice.

Toyota and Daihatsu will work toward establishing the internal company in January 2017. It will be based on Daihatsu’s approach to manufacturing affordable vehicles for emerging markets where the potential for growth is high, but also where competition and regulations are intensifying.

According to a release from Japan this morning, Daihatsu will be responsible for unified development, procurement and production preparation for compact vehicles for emerging markets based on “DNGA.” This is a new Daihatsu vehicle architecture now being defined. Toyota will support these efforts by providing knowledge and resources.

Daihatsu is expected to take the lead in the internal company, which will link areas of both Daihatsu and Toyota. As such, the internal company will be positioned differently from the so-called “companies” of the product-based in-house company system Toyota introduced to change its work processes in April 2016.

Explaining one of the benefits for Toyota of this initiative, Toyota Executive Vice President Shigeki Terashi said, “With the establishment of the internal company, Toyota intends to learn the very fundamentals of Daihatsu’s competitiveness and change the way we work.”