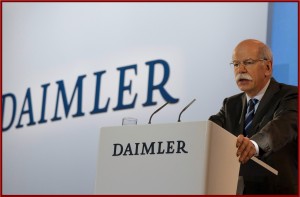 “We want to beat the competition – on a permanent basis,” said Chairman Dieter Zetsche.

At the Annual Shareholders’ Meeting of Daimler AG in Berlin on Wednesday, shareholders approved a dividend for the year 2012 of €2.20 per share, the same as in 2011 for a total payout of €2.35 billion. About 5,000 shareholders and  representatives or 29% of the outstanding shares were voted. The actions of the members of the Board of Management were ratified by 98.6% of the votes cast.

Daimler is pursuing the following targets of selling at least 1.6 million Mercedes-Benz passenger cars each year as of 2015 and leading the way in the premium segment also in terms of unit sales by 2020, consolidating its leading role in the truck sector by selling more than 500,000 units in 2015 and over 700,000 units in 2020, and growing also in its other divisions.

Chairman of the Board Dieter Zetsche said, “We strive to be a sustainably competitive company that not only produces the S-Class, but which is the S-Class.”In addition to the growth targets, the Group has corresponding profitability goals. In the medium term, it wants an average return on sales of 9% from its vehicle operations across all market and product cycles, with return targets for the individual divisions of 10% for Mercedes-Benz Cars, 8% for Daimler Trucks, 9% for Mercedes-Benz Vans and 6% for Daimler Buses. The target for Daimler Financial Services is a return on equity of 17%.

The members of the Supervisory Board representing the employees were elected in March and their period of office begins with the end of the 2013 Annual Shareholders’ Meeting. The members reelected are Erich Klemm, Michael Brecht, Juergen Langer and Joerg Spies. Elke Toenjes-Werner and Wolfgang Nieke were elected for the first time as members representing the employees.