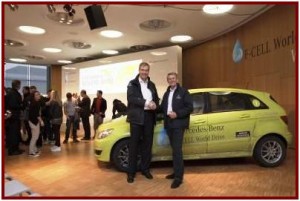 Dr. Andreas Opfermann (Linde) and Dr. Thomas Weber (Daimler) in front of the B-Class F-Cell that Daimler hopes to commercialize.

The light duty fuel cell vehicle (FCV) market has shown promise for decades, but the problem remains that it is space age technology at NASA levels of cost. Not surprisingly automakers have varying levels of interest in the technology that always appears to be just a decade or so from commercialization.

Nonetheless, several of the major global auto manufacturers have maintained aggressive programs to develop commercial fuel cell vehicles in an attempt to make successful what could – in theory at least thus far – be the ultimate in sustainable transportation technology, including General Motors as it headed toward bankruptcy.

According to a new Pike Research report, the two light-duty FCV manufacturers who are best positioned in this formative stage of the market are Daimler and Honda. However, Daimler has made ambitious announcements on fuel cell technology readiness in the past, and these – well, did not pass the reality test. Daimler recently moved up its FCV target date to 2014 from 2015.  We will see if anything comes from this except an expensive taxpayer subsidized demonstration program. 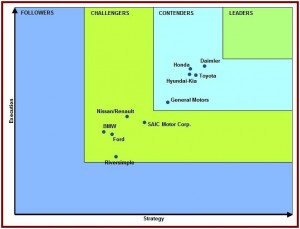 Honda is number two in Pike’s analysis, based on its FCV – the Clarity – and its efforts to lay the groundwork for a larger commercial launch.

Daimler had the highest overall score in the Pike Pulse report, because it has laid out a clear path to producing a commercially viable FCV.  Other contributing factors cited include its strong relationships with government partners and its recent announcement to partner with Linde on infrastructure development.  Over the coming three years, the two companies plan to construct an 20 hydrogen filling stations in Germany. Since 2009, Mercedes-Benz has experimented with a fuel cell powered B-Class car or what it calls the F-CELL with the intention to test large-scale production conditions.” The B F-Cell is currently being driven on a day-to-day basis by customers in Europe and the USA.

Honda is number two in Pike Research’s analysis, based on the existence of its fuel cell vehicle – the Clarity – and its efforts to lay the groundwork for a larger commercial launch.

“Automakers will continue to refine their products between now and the 2014/2015 deadline for commercial launch,” says senior analyst Lisa Jerram.  “In order to meet this target, the OEMs must continue to test and refine their fuel cell systems as well as the vehicle integration and optimization.  They will also be focused on driving down vehicle costs.”

The “Pike Pulse Report: Light-Duty Fuel Cell Vehicles” evaluates 10 automakers working on fuel cell vehicles and rates them on 12 criteria for strategy and execution, including go-to-market strategy, product portfolio, partnerships, innovation, reach, market share, pricing, and staying power.  An Executive Summary of the report is available for free download on the firm’s website.