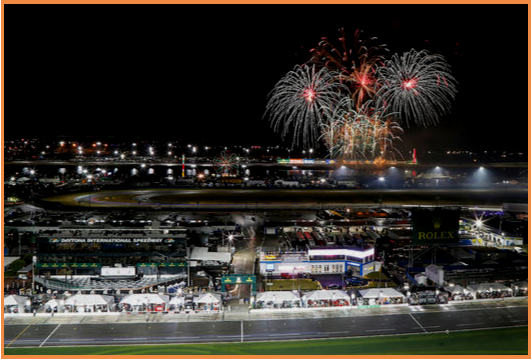 This isn’t a sprint race. Winning cars must be on pace for all 24 hours until the sprint begins toward the end. The sprint never came after the rain set in, which made for an anti-climactic close.

NBC Sports’ broadcast debut of the running of the Rolex 24 Hours of Daytona was marred by rain that appeared as predicted Sunday in the early morning hours and saw the race hobbling under yellow and red lights. The 24 Hours was interrupted by yellow flags 17 times and two red ones Ultimately it ended early, a first in 57 years – red flagged – with the cars parked, since the track was too dangerous to continue.

Cool temperatures prevailed during the Saturday afternoon start and into the night. Rain began at 5:30 a.m. Sunday. Cars sat for 1:45 hours beginning at 6:05 a.m. Even Roger Penske said he had never seen a race like this, wistfully adding that the fans saw some good racing during the first half of the water-logged event. True, but that’s not twice around the clock. (Click here for an in car dry lap)

The race was red flagged and stopped at 12:40 p.m. Sunday at 2:26 p.m. in a deluge.  IMSA threw in a very wet towel and waved the checkered flag to end the Florida non-Sunshine State event early as the field was parked under a red flag. The twice around the clock winners in all four classes were lounging about when the checkered flag was damply displayed with standing water on the track to end the long periods of no racing.

Also notable for non-entertainment were the holes in the NBC Sports coverage that left bewildered talking heads without enough personal knowledge, ideas, non-gushing conversational skills, or pre-packaged fillers and footage to move forward – snore – the much-hyped broadcast of non-racing racing. 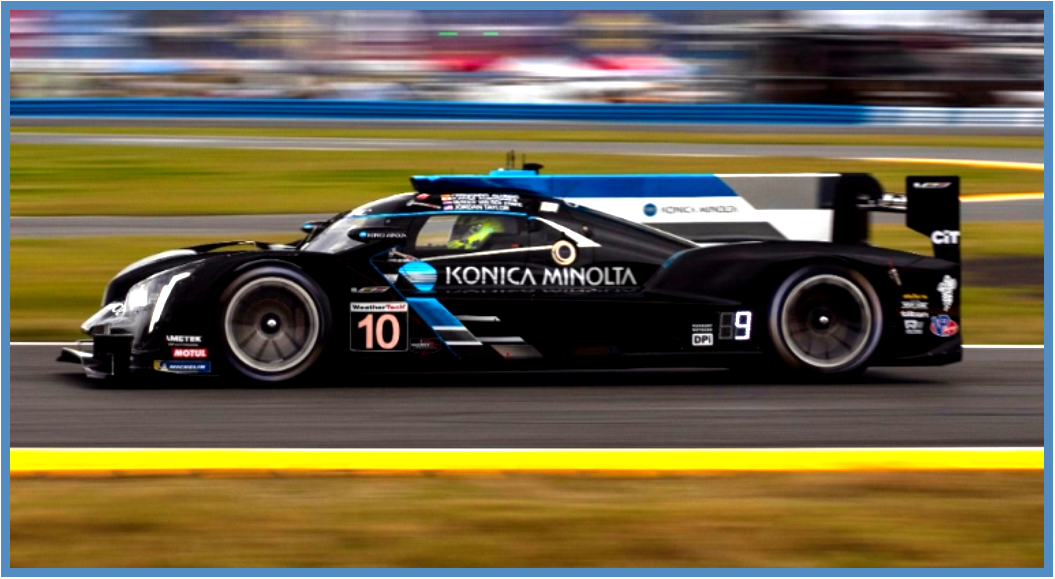 The most pronounced winner, Cadillac* after debuting in IMSA three years ago, is also arguably the one with the most marketing troubles selling automobiles against the Germans – BMW, AMG Mercedes, Porsche – the mainstay or the excuse of  expensive racing programs.

The Cadillac brand posted a Rolex 24 Hour hat trick with their third win in as many years in the second year of the new DPi Class. The Wayne Taylor led Konica Minolta Cadillac team won. A Whelen Engineering Cadillac finished second, after Whelen abandoned the prototype class in the off season. Last year the team was the prototype champion. All told there were seven competitive Cadillacs at the race. It’s clear they will be a force all year, and might be in internal political racing with Corvette. The Chevrolets were having a notably bad day capped  with a world-class totally out of control shunt that traversed a football field before ending abruptly in an infield tire wall.

The #11 Grasser Lamborghini Huracan GT3 of Engelhart, Mirko Bortolotti, Rolf Ineichen and Rik Breukers were triumphant in the quirky and small GT Daytona class. The victory – one where the winning driver admitted afterward that he didn’t know was coming as he made his last pass –  came with two hours left. Engelhart advanced from ninth to first in untrustworthy conditions with inspired driving. The team is one to watch at Sebring.

“We were actually one lap down when I started the stint,” recalled the good-natured German Englehart. “I managed to overtake the leaders, so when the yellow came out we got a wave-by and rejoined the pack. “When the red flag came out, I didn’t know I was first,” the German said. “I thought we were still fighting, and I was giving everything to come to the front.”

The upshot meant Grasser successfully defended the GTD title it won last year, although the 32-year-old German was not part of the lineup that took the honors in 2018.

Other contenders – the #33 Riley Motorsports Mercedes AMG-GT3 and the #29 Land Motorsport Audi R8 LMS – were slow, caught in the Daytona washer spin cycle. Too soon to say they are not on pace for the season.

There were five GT Daytona (GTD) cars on the lead lap at the end. There were another five GTD cars that finished one lap down and one more that was two laps behind at the end of the race.

The five cars on the ending GTD lead lap represented four different manufacturers: Lamborghini (first), Audi (second and fourth), Lexus (third) and Acura (fifth). Another Lexus was the first car a lap down in sixth, followed by a Mercedes-AMG, a Porsche, a Ferrari and a BMW.

BMW Team RLL took victory in GT Le Mans class at the 24 Hours of Daytona. When the opening round of the WeatherTech Sports Car Championship was suspended due to heavy rain for the second time, the #25 BMW M8 GTE and drivers Connor De Phillippi (USA), Augusto Farfus (BRA), Philipp Eng (AUT) and Colton Herta (USA) were leading the GTLM class. 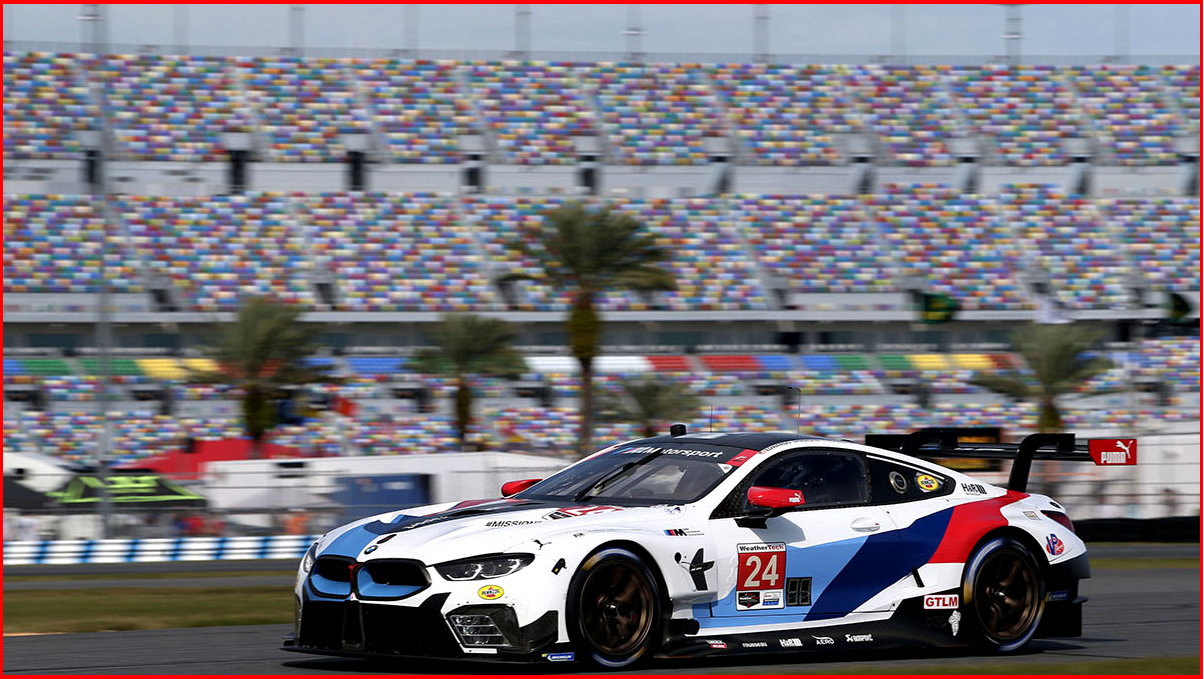 When the cars were free to race again, the BMW drivers held their line, avoided making any mistakes and established themselves in the leading group. One lap before the race was suspended for the second time, Farfus, at the wheel of the #25 car, took the lead. This ultimately proved to be the decisive moment in the race, since it never resumed, and the BMW drivers were left to celebrate a momentous albeit parked victory.

Ford Chip Ganassi Racing’s No. 67 Castrol Ford GT and drivers Ryan Briscoe, Richard Westbrook and Scott Dixon overcame harsh weather conditions to nearly capture FCGR’s third consecutive Rolex 24 At Daytona victory. The strategy was working out as the race unfolded. However, the skilled drivers were unlucky, and the trio missed out on victory by a single lap after the race ended early due to the red flag, pushing them back to fourth. Joey Hand, Dirk Mueller and Sebastien Bourdais finished seventh in the  #66 Motorcraft Ford GT.

“We had a car that was quick enough to win this race, and we got ourselves in a position to win the race at the end, or at least have a good shot at it,” said Hand. “Out front, the rain was treacherous, and I was surprised we went green, but everybody’s in the same boat. I just drove it down into Turn 1 and got hit from behind by a Porsche just spinning out of control. That’s not the way you want to start the season.” See you at Sebring Ford and Porsche. While memories are long in racing, Daytona – given the conditions – was run cleanly from where AutoInformed sat and snoozed. 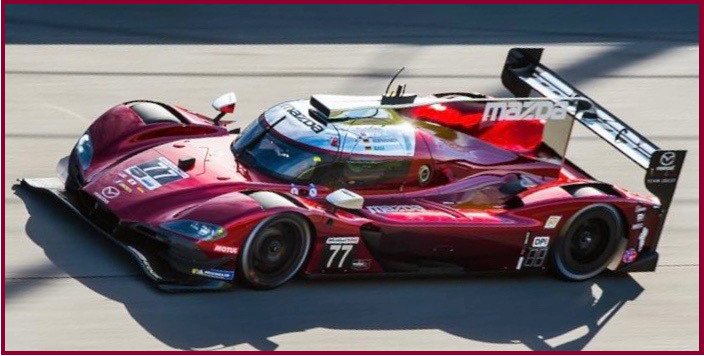 The #77 Mazda RT24-P Driven by Olly Jarvis, traveled the Daytona International Speedway road course faster than any other car in history in Thursday’s qualifying for the Rolex 24 at Daytona. Jarvis not only captured the overall pole position but broke the 26-year-old course record on the 3.56-mile road course. This is Mazda’s first overall pole position in its history at the Rolex 24 at Daytona, and is the first pole position in IMSA for Jarvis and the Mazda RT24-P.

Mazda has captured 22 class victories at the Rolex 24 at Daytona, beginning forty years ago with a 1-2 finish for the Mazda RX-7 in the GTU class.

At the start of the race, Jarvis led in the car he shared with Timo Bernhard, Tristan Nunez and Rene Rast. The No. 55 Castrol Mazda RT24-P that qualified in fourth place by Jonathan Bomarito, and was shared by Olivier Pla and Harry Tincknell, contended for the lead throughout the early hours of the race. While one Mazda RT24-P led and the other ran in the top-three, neither would see the checkered flag.

“We are leaving Daytona disappointed with the end result,” said Jarvis, “but we can be extremely proud of our performance. Up until the issues we experienced, we were running extremely strongly, always in the top-four and definitely had the pace to fight for the win. We have a lot of work to do ahead of Sebring”…

The promising start ended with broken cars. The No. 55 Castrol Mazda RT24-P was credited with ninth place in the Prototype class, and the No. 77 Mazda RT24-P with 11th place.

The #18 DragonSpeed car was listed provisional winner in LMP2, but since that car crashed causing the final caution that ended the race, it could be reviewed.  The DragonSpeed car led by four laps above the #38 Performance Tech Motorsports entry before the collision.

The real racing was up front during the first 12 hours. It was dry, sunny but cool, and drivers were fighting the perennial endurance problem: This isn’t a sprint race. To win a car must stay on pace for virtually all 24 hours until the sprint for a Rolex watch begins toward the end. That the sprint never came after the rain set in made for an anti-climactic close – if any fans were still watching.

Fans that tuned in early were fed some predictable stuff about the history of the race, but virtually nothing on the technical aspects that separate the four classes of cars running, and how they fit into the international racing scene. There was little history about what is often considered America’s best endurance sports car race, one that at times can compete with Le Mans, Sebring, Watkins Glen and Laguna Seca.

The Race Cars of IMSA

The two styles of cars, subject to IMSA rule tweaks such as the kinds that brought its owner NASCAR closer in reputation to the joke that professional wrestling is. The adjustments allegedly even the competition – a money in bank of performance for the megabucks sponsors funding the series’ four classes. Ford GTs were notable victims this race with added weight and aero restricters to cut their power. (IMSA Adjusts the 2019 Sports Car Racing Rules Again)

The fastest and most technologically advanced sports cars in North America, the Daytona Prototype International (DPi) car is specifically designed and engineered for the race track. DPi cars use a chassis built to international specifications powered by engines from mainstream automotive manufacturers such as Acura, Cadillac, Mazda, and Nissan. In addition, DPi bodywork includes styling cues that mimic the engine manufacturers production cars.

These are closed cockpit cars developed by four approved constructors. In addition to the IMSA WeatherTech SportsCar Championship, LMP cars are eligible to compete in other global series such as the FIA World Endurance Championship, which includes the 24 Hours of Le Mans.

Using the same technical regulations as the 24 Hours of Le Mans, the GTLM cars are the most elite and fastest GT cars on the track. Roughly based on production models, they are engineered to extract the maximum performance. The class sometimes is a proving ground for leading manufacturers such as BMW, Corvette, Ferrari, Ford, and Porsche.

Cadillac on a Roll

*Cadillac DPi-V.R is a prototype racing car that started competing in the IMSA WeatherTech SportsCar Championship in North America in 2017. It is the successor to the Corvette DP. It was Cadillac’s return to sports car racing as a full constructor since Cadillac Northstar LMP that competed in American Le Mans Series from 2000 to 2002.

A closed-top design, it has several new mechanical and safety features not used in the Corvette DP car. Zylon anti-intrusion panels are built into the frame that prevent any mechanical components from coming into the chassis in the event of an accident. Cadillac DPi-V.R. has electric power steering system, an improved gearbox a race-prepared, normally aspirated Cadillac 6.2-liter V8 engine with basic architecture of the third-generation Cadillac CTS-V with 640 horsepower. (AutoInformed.com on Cadillac CTS-V Debuts. V is for Very Fast and Expensive and Driving the Cadillac CTS-V Coupe)

It produces ~600 horsepower tuned for racing with IMSA-mandated air restrictors, with a maximum allowable RPM of 7,600. The engine transfers power to the rear wheels through a transverse X-TRAC paddle-shift transmission. It is less than half the weight of the production sedan.