Katherine Legge will be one of the four full-time drivers for the Michael Shank Racing/Acura Motorsports campaign starting now at the 24 Hours of Daytona for the 2017 IMSA WeatherTech SportsCar Championship.

Legge will drive the #93 Acura NSX GT3 for the full season with Andy Lally. Graham Rahal and Mark Wilkins will be additional drivers for the Rolex 24 during one of the most famous – if not the most famous – sports car races in America.

Calling the race for IMSA radio will be Shea Adam. It’s an acknowledgement – a growing trend in motor sports – that the girls can run with the boys. (A tip of the AutoInformed fedora to trailblazers Shirley Muldowney (and Shirley on her career), Janet Guthrie and Denise McCluggage.)

In 2016, driving for DeltaWing Racing, Katherine Legge became the first woman to lead overall at Daytona, coming from the back of the field since the team missed qualifying. She led the race twice for more than 20 laps. 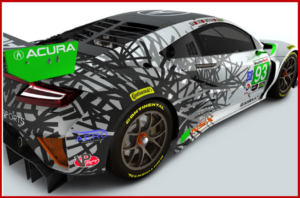 Katherine was also the first woman to lead an American Le Mans Series race overall, also with DeltaWing Racing, at the Road America circuit in 2013. She finished third in the Prototype drivers’ championship that year, with six podium finishes in 10 races.

“I started racing go-karts when I was nine years old and my family went on a holiday, says Legge. “My uncle and my dad had a go on the karts and I really wanted to try. I tried it once and I loved it. I was always a bit of a tomboy; I wanted the adrenaline. We came back to England and since there’s a local go-kart track my dad and I went to check it out. My dad started racing and I nagged him enough that by Christmas I got a go-kart. We raced together for six races and he decided that he was just going to focus on me racing and I’ve been racing ever since.”

Ms. Adam is the daughter of a news anchor and a race car driver. Shea grew up in IMSA paddocks and press rooms. She got her first tryout behind the mic when RadioLeMans.com flew her to France to cover the 24 Hours of Le Mans in 2012.

“I was born into it,” says Shea. “My dad raced cars professionally for 42 years, so my first word was ‘car.’ During 2012, she also began working for the American Le Mans Series in a TV truck as the graphics supervisor. In addition to the 24 Hours of Le Mans, Shea also pit reports for the 12 Hours of Bathurst and has covered Formula One, IndyCar, Trans-Am, among other races.  Shea now is part of the IMSA Radio team, “realizing her dream one event at a time.”

“I think this track is unique in that you have to be completely on it, says Legge. “It’s like a 24-hour sprint race, so you can’t take it easy in any way. You can’t drop the ball, you can’t get lost in the pit stops. It’s a 24-hour sprint race and it’s the only one like it in the world. It’s just totally unique. The banking and the lights are awesome. You can’t miss an apex and, if you want to win, you have to be completely on it all of the time.”