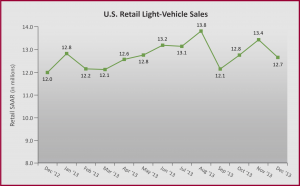 The Detroit Three continue expand  inventory with a combined days’ supply of 87 days at the beginning of November to 93 at month end.

“Retail sales in 2013 are expected to reach 12.8 million, with consumer spending reaching a record $375 billion, a $40 billion increase from 2012,” says John Humphrey of J.D. Power, the source of the forecast.

Vehicle manufacturing in North America year-to-date through November has increased +5% from the same period in 2012, with nearly 700,000 units of additional volume. Even as inventory has increased, production volume in November remained strong (or foolish) at 1.4 million units, a +4% increase from November 2012.

The Detroit Three continued to build inventory rapidly, and their combined days’ supply climbed from 87 days at the beginning of November to 93 days by the end of the month. This is potentially worrisome. It is normal for manufacturers to build up inventory to meet year-end demand, but the level is ahead of current sales rates. Moreover, late year inventory bloat has the potential to affect production in the first quarter of 2014. In contrast, European and Asian manufacturers all maintained or reduced their inventory levels in November.