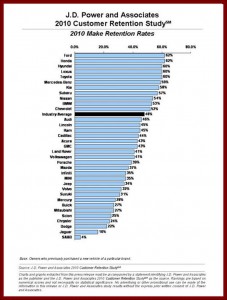 Following Ford and Honda are Hyundai, Lexus and Toyota.

While customer retention rates among Detroit Three brands as a whole have improved slightly from 2009, domestic makers still trail import brands when an existing vehicle owner considers purchasing the same brand again. In 2010, 69% of owners who traded in a vehicle from a domestic brand purchased another domestic vehicle, compared with 68% in 2009. (Click on chart to enlarge)

However, in 2010, 90% of owners who traded in a vehicle from an import brand purchased another import vehicle – a level that has remained consistently high during recent years, according to J. D. Power and Associates.

This is a critical gap, which  increases the marketing costs at the Detroit Three, decreases profits and continues a long standing trend of losing ground to import brands that ultimately resulted in the bankruptcies of Chrysler and General Motors in 2009.

There is some good news, though, for the Detroit Three, all of whom posted sales increases in November. Compared with their customer retention rates, domestic brands have made progress during the past two years in customer conquest rates from import brands. In 2010, 14% of buyers of domestic brand vehicles previously owned an import, up from 10% in 2008.

Ford and Honda rank highest in a tie among automotive brands in retaining vehicle owners – each retains 62% of owners.

Ford’s retention rate is primarily from Edge, F-Series and Fusion models, while for Honda, retention is from Accord, CR-V and Pilot. Comparing the two brands,

“Now that economic and market conditions have improved somewhat, vehicle owners are increasingly citing emotional, rather than practical, reasons for staying with their vehicle brand or switching to a different one,” said Raffi Festekjian, director of automotive product research at J.D. Power and Associates.

“While import brands still have notably higher customer conquest rates than domestic brands, the gap is beginning to narrow,” said Festekjian. “In recent years, domestic brands have achieved parity or even surpassed the performance of import brands in initial quality and new-vehicle appeal, and customer perceptions of these nameplates seem to be evolving accordingly.”

The 2010 Customer Retention Study is based on responses from 123,601 new-vehicle buyers and lessees, of which 81,350 replaced a vehicle that was previously acquired new. The study was fielded between February and May and August and October 2010.