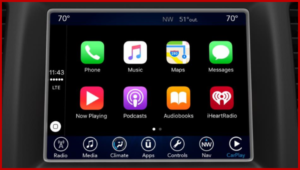 The FCA announcement comes as the latest data show that during 2014 3129 people were killed and 431,000 were injured in crashes involving distracted drivers.

“With the addition of the Siri Eyes Free feature for later model-year vehicles, more customers will have an opportunity to integrate their iPhones with Uconnect while keeping their hands on the wheel and their eyes on road,” claims Tricia Hecker, Global Head of Connected Services, FCA.

This is the standard industry non-defense of what has become an extremely popular, profitable and now a national epidemic. Unmentioned – as always – is that the cognitive activity of using a cell phone increases risk because it takes away from concentrating on driving – before, during and after phone use.

Distracted driving activities including using a cell phone, also is caused by texting, and eating. Using in-vehicle technologies – navigation systems, web access – are also potentially deadly sources of distraction. While any of these distractions can endanger the driver and innocent people, texting while driving is especially dangerous because it combines all three types of distraction.

FCA drivers can activate Siri Eyes Free from the voice button on the steering wheel and speak commands to send text messages, play music, set reminders, place phone calls and access turn-by-turn directions. Drivers will push and hold the voice recognition button on the steering wheel until the Siri smenu appears on the 8.4-inch touch screen and the user hears tones. Siri Eyes Free is compatible with an Apple iPhone 4s or later.

The new FCA software update is available for the following vehicles equipped with a Uconnect 8.4 touchscreen system:

Each FCA vehicle comes equipped with a Uconnect system that provides drivers with a range of available communication, navigation, entertainment features and connected services, including:

Ken Zino is an auto industry veteran with global experience in print, broadcast and electronic media. He has auto testing, marketing, public relations and communications expertise garnered while working in Asia, Europe and the U.S.
View all posts by Ken Zino →
This entry was posted in distracted driving and tagged autoinformed.com, FCA Uconnect, Ken Zino. Bookmark the permalink.