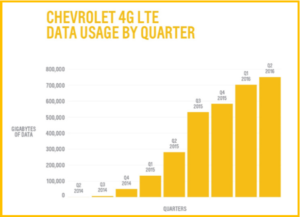 Chevrolet is reducing its OnStar 4G LTE data plan pricing by as much as 50%. The all-new 4 GB monthly plan provides four times the amount of data available previously for $20 per month.

The marketing move comes as Chevrolet has sold more than 2.1 million 4G LTE connected vehicles since June of 2014. It claims, with some justification, to be an industry leader in bringing this technology to drivers. In only two years, Chevrolet customers have consumed more than 3 million gigabytes of data – the equivalent of streaming more than 100 million hours of music. Chevy says its in-vehicle data usage continues to trend upward for 4G LTE.

The announcement follows the recent release of preliminary data from the U.S. Department of Transportation’s National Highway Traffic Safety Administration that show a 7.7% increase in motor vehicle traffic deaths in 2015. An estimated 35,200 people died in 2015, an increase from 32,675 fatalities during 2014.

Although the data require additional analysis, the early NHTSA estimate shows 9 out of 10 regions within the United States had increased traffic deaths in 2015. The most significant increases came for pedestrians and bicyclists. Distracted driving in the view of critics is a dangerous epidemic on America’s roadways. In 2014 alone, 3,129 were killed in distracted driving crashes.

“Wireless connectivity has proven to be a beneficial technology for many Chevrolet customers, from contractors who use their Silverado as a mobile office to families using their Suburban on a summer road trip,” said Sandor Piszar, Chevrolet truck marketing director. “As our customers increase their usage of the 4G LTE technology, we are able to make it more affordable for them.”

Data is provided by AT&T for Chevrolet customers. For more information on the new plans and pricing, see: https://www.onstar.com/us/en/4glte-subscriber.html

Ken Zino is an auto industry veteran with global experience in print, broadcast and electronic media. He has auto testing, marketing, public relations and communications expertise garnered while working in Asia, Europe and the U.S.
View all posts by Ken Zino →
This entry was posted in distracted driving and tagged autoinformed, autoinformed.com, Ken Zino. Bookmark the permalink.