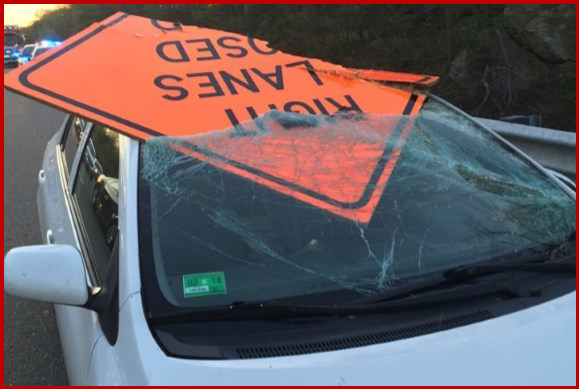 An 18-year-old Rhode Island man was driving on I-495 in Wrentham, Massachusetts  recently when he hit a highway sign warning of impending construction, says Boston.com. The sign then proceeded to trash the windshield of his Toyota Corolla, hitting him in his obviously brain-less head.

According to state police, an initial investigation into the incident found the driver wasn’t paying attention to traffic stopped ahead of him due to a construction project lane closure. When the man from Tiverton, Rhode Island, tried to stop, he lost control and veered off the road, striking a construction sign warning about the lane closure, according to police. He went to Rhode Island Hospital with a head laceration. In a statement, police reminded drivers to pay attention.

Ken Zino is an auto industry veteran with global experience in print, broadcast and electronic media. He has auto testing, marketing, public relations and communications expertise garnered while working in Asia, Europe and the U.S.
View all posts by Ken Zino →
This entry was posted in distracted driving, people and tagged autoinformed, autoinformed.com, Ken Zino. Bookmark the permalink.