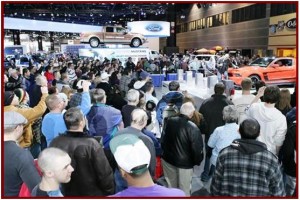 The good news was attributed to “great deals from manufacturers, a reenergized appreciation of new cars and technology, pent-up demand—and some cooperation from Mother Nature.”

The question that has plagued automakers and dealers since the first new-car auto show in New York City a hundred and ten years ago is whether the bottom-line expense of participating pays off in incremental sales.

In a post-mortem wrap-up of the February show’s events, the Chicago Automobile Trade Assn., sponsors of the show, headlined: “Showroom sales spike in wake of show.”

The announcement goes on to report “dealers around Chicago are experiencing a dramatic post-show bump in sales.” The good news was attributed to “great deals from manufacturers, a reenergized appreciation of new cars and technology, pent-up demand—and some cooperation from Mother Nature.” In other words, for Chicagoans, the winter weather was worse before the show than afterwards.

Show chairman dealer Kevin Mize said, “At the show, people ask questions, explore and compare vehicles, and have a chance to actually feel the wheel in their hands. At that point, the motivation machine starts up, and by the time the show goers get home, many are ready to turn their fantasy into the next resident of their garage.”

While the Chicago Show has long been one of the major stops on the auto makers’ winter doldrums marches, like the Los Angeles show it also seems more related to stimulating the local market than, say, a Geneva Show, a showoff place for manufacturers.

Of interest to Detroiters, the general manager of the Chicago Auto Show is Dave Sloan, who grew up in Birmingham, son of long-time Ford and American Motors PR exec Jerry Sloan.