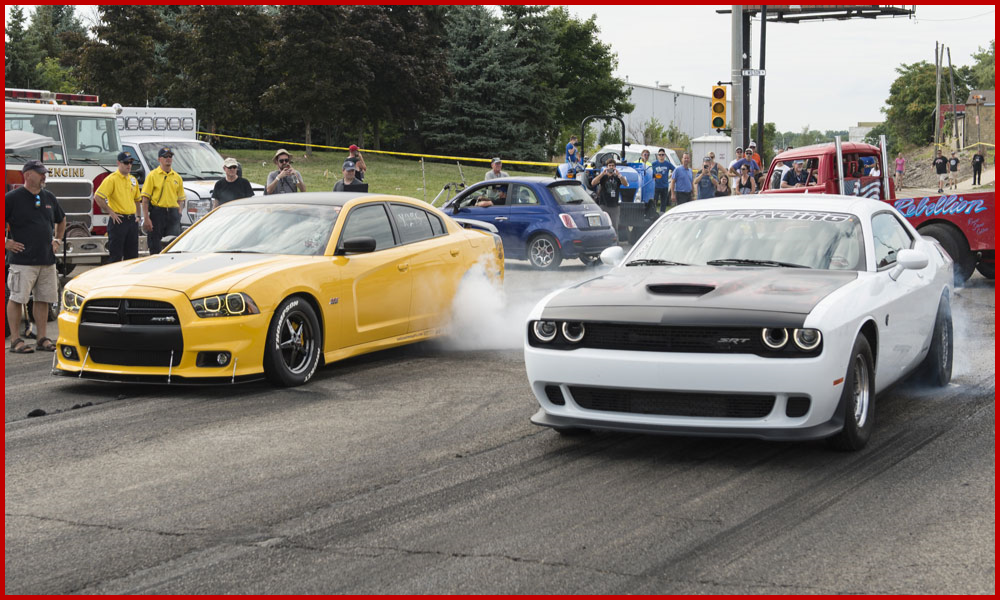 Street legal racing on Woodward Avenue returns tomorrow via Roadkill Nights Powered by Dodge. Once again, Roadkill Nights has upped the ante this year with a total cash purse of $29,000 – a mere pittance compared to the fines collected over decades in an illegal stop light to stop light “run what you brung” white-smokey burning rubber festival. (Dream Cruise Drag – Roadkill Runs Legally on Woodward Ave)

As part of the overall horsepower burnout, $10,000 will be awarded to the quickest Dodge car. Caveat: it must be powered by a Dodge engine, not a rat motor or mouse motor or God forbid, a Blue Oval mill.

General admission for spectators is $10 per person; $5 per person for Pontiac residents (at event only). Children 12 and under are free.

This year’s high-decibel gas guzzling festival will also include a first-ever celebrity showdown with “Roadkill” cohosts David Freiburger and Mike Finnegan, drag racing stars Leah Pritchett and Matt Hagan, “The House of Muscle” car guru Mike Musto, and “Hot Rod Garage” hosts Tony Angelo and Lucky Costa. Leading the races will be Freiburger and Finnegan, cohosts of a YouTube automotive original series – yawn – in the United States. The celebrity showdown champion will be awarded $10,000, which will be donated to their charity of choice.

Chris Jacobs of Velocity’s “Overhaulin,” NHRA national event announcer and host of “Put Up or Shut Up” Brian Lohnes and self-confessed car nut Clarence Barnes will cohost the activities both on and off the dragstrip.

If the fastest Dodge is also the fastest car of the night (the overall winner), the driver would win $20,000.

Ken Zino is an auto industry veteran with global experience in print, broadcast and electronic media. He has auto testing, marketing, public relations and communications expertise garnered while working in Asia, Europe and the U.S.
View all posts by Ken Zino →
This entry was posted in people, racing and tagged autoinformed.com, Ken Zino, roadkill, Roadkill Nights Powered by Dodge, street racing on Woodward Avenue, woodward avenue. Bookmark the permalink.