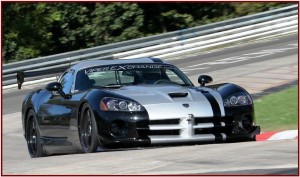 A production Dodge Viper SRT10 ACR ( for American Club Racer) posted a 7:12.13 lap time on the12.9-mile Nürburgring Nordschleife, according to numbers just released. This means that the Viper was faster than a 2012 Chevrolet Corvette ZR1, which  posted a lap time of 7:19.63  back in June. (Corvette ZR1 Cuts 6 Seconds from Nürburgring Lap Time)

With 154 turns around the 12.9 mile (20.8 km) course, the Nürburgring Nordschleife (“north loop”) is used by performance car makers to bolster marketing claims. Click here for in Corvette video. Click here for Viper video.

SRT worked with the Viper Club of America and the ViperExchange by Tomball Dodge team from Tomball, Texas, which supplied two unsold 2010 Dodge Viper ACR’s off their showroom floor for the record-setting effort.

In an attempt to wring out some final sales from the old Viper, Dodge built 500 2010 model year Viper coupe and roadster models. A 2012 model is planned, but sales of existing Vipers have been slow – 10 ytd through August versus 54 during 2010 for the same period. New 2010 Viper asking  prices are around $90,000.

During its bankruptcy in 2009, Chrysler tried to sell the Viper business,  including the Viper sports car, its V10 engine, the intellectual property rights and its entire Conner Avenue plant in Detroit for only $10 million. There were no takers. Ultimately, Fiat changed its mind and decided to keep Viper as a brand when Chrysler emerged from controversial taxpayer financed  bankruptcy in 2009. The logic of this keep the snake move remains to be proven in my view.

SRT’s first official visit to the Nürburgring took place in August 2008 when the newly launched 2008 Dodge Viper ACR came to Germany with driver Tom Coronel and established a new production car lap record time of 7:22.1, a record that stood for American cars until the 2012 Corvette showed up. Porsche and Corvette will no doubt respond.