Posted on 7 October 2018 by Kenneth Zino 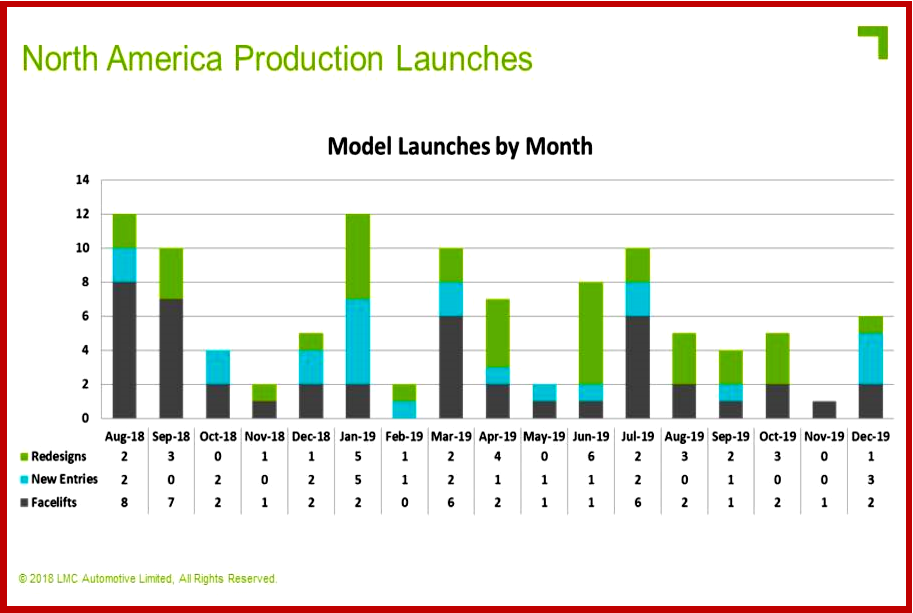 Constant freshenings: It is simply the price of the ante’ needed to play the next model year in a multi, multi-billion competitive poker game.

It’s true that we have devoted a fair amount of space at AutoInformed on connected vehicles, autonomous ones, and the large investments to make the current dream or is that nightmare of automakers come to fruition. However, while vehicle manufacturers and suppliers are pursuing such capital-intensive projects, the core business – new products in the showroom is proceeding apace.

Industry stakeholders will be further challenged over the next 17 months as numerous critical new vehicle launches will add to the strain of an already stressed industry,” says Bill Rinna, in charge of Americas Vehicle Forecasts at LMC Automotive.

LMC predicts 105 all-new, redesigned and face-lifted model launches at plants over that time-frame – an average of six a month – as automakers freshen and fill white spaces (translation more crossover SUVs) in showrooms, localized production of previously imported models because of trade and currency and market relevancy issues and keep current models fresh in look and electronics.

It is simply the price of the ante’ needed to play the next model year in a multi, multi-billion competitive poker game. There’s no liar’s hand here. There are few if any bad vehicles out there; so, the showrooms need to be fresh as awareness leads to consideration and then – it’s hoped – purchase or lease.

Of that total, 33 models (31%) will launch between now and the end of the year, much higher than last year’s total of 19 during the same period. Such a concerted level of product activity puts pressure not only on the vehicle manufacturers, but also on the suppliers who provide content across multiple automakers and vehicle programs., Renna observes.

Consider GM. While already in the process of ramping up the all-important next generations of the Chevrolet Silverado and GMC Sierra Light Duty at its Fort Wayne plant, the OEM is also launching the new Cadillac XT4 this month and will begin production of the reinvented Chevrolet Blazer at Ramos Arizpe by the end of the year. Factor in the facelifts to the Chevrolet Camaro, Cruze and Malibu and it promises to be a busy few months for GM.

While obviously smaller than regional powerhouse GM, Daimler, too, will have a challenging year-end period, with key vehicle launches at new plants to produce the A-Class, as well as the start of full production of the redesigned Sprinter Van at a new North American facility. The model is currently fully built in Germany and reassembled locally as a way of circumventing the Chicken Tax. All this while Daimler also puts in place a contingency plan, given its high exposure to import and export tariffs.

And this is just a snapshot of a couple of the players in the region. Others, such as Ford, Toyota and Renault-Nissan-Mitsubishi, will face similar challenges in the short term.

“The final months of the year will certainly be extremely demanding,” says LMC., particularly with a cloud of uncertainty hanging over the industry. On the flipside, with so many new and refreshed vehicles on offer, consumers should reap the benefits of this flurry of activity.