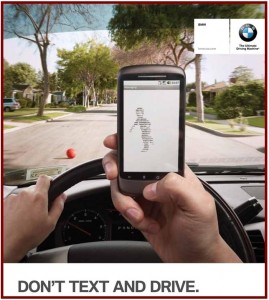 BMW, the luxury brand that is in the process of becoming the first automobile manufacturer in the world to have voice-read e-mail messages inside its vehicles, has been singled out not for distracted driving but for praise by the U.S. Secretary of Transportation for saying it is against texting and driving?

The latest BMW electronic feature – or distraction in the view of safety advocates – will be introduced starting this fall in Europe and North America on all BMW models equipped with its navigation system. BMW claims the iDrive operating system provides “simple, safe and intuitive control of all functions, while causing minimum distraction from the road.”

Say it ain’t so Secretary Ray LaHood, who up to now has been using his bully pulpit against the deadly distracted driving epidemic, which is responsible for almost 6,000 deaths each year and more than 500,000 injuries, according to the National Highway Traffic Safety Administration that he directs.

Owners of a BlackBerry smart phone will be able to access the phone’s e-mail function via the BMW iDrive operating system. A new Bluetooth interface will integrate the BlackBerry into the vehicle. It allows e-mails to be received and displayed on the “Control Display,” and even read aloud by means of an optional voice output feature.

It is just the latest example of the ongoing integration of entertainment, communication and online functions in vehicles as the number of deaths and injuries from distracted driving increases. Automakers show little interest in stopping the sale of profitable vehicle electronics.

Particularly lethal is the widespread use of cell phones. The issue is not the type of phone a driver uses, rather it is the distraction caused by the conversation. In spite of auto industry assertions to the contrary, the fact is that hands-free devices do not make cell phones any safer. Several studies indicate that the principle risk is the cognitive distraction of anything that diverts attention while driving.

The new BMW e-mail access feature ties in directly with the BMW ConnectedDrive office functions introduced at the beginning of last year. These allow not just call and contact lists, but also calendar entries, text messages, tasks and memos to be transferred from compatible smart phones to the vehicle via Bluetooth interface.

The entries can be selected using the Controller of the iDrive operating system and shown on the Control Display. Even a picture file with a contact address on a mobile phone can be shown on the vehicle monitor.

On his web site LaHood says that “in December, I met with BMW of North America CEO Jim O’Donnell, who shared my concern about the alarming number of deaths and injuries caused every year by distracted driving.”

Now comes a stunning conclusion from the Illinois Republican:

“And I’m pleased to say that today, BMW is joining our fight with a new national anti-distracted driving campaign called, ‘Don’t Text and Drive: When the engine starts, the texting stops.’ Soon, people across America will see BMW’s powerful new television ad, as well as print and online advertisements reminding drivers that no call or text is worth the risk.” LaHood said.

It’s sometimes hard to become more cynical about the tawdry cast of characters who reside at great taxpayer expense along the Potomac River. LaHood’s fawning over this ad campaign makes it much easier in my view. Is it a coincidence that LaHood is from Illinois, the home of the 1919 Black Soxs?