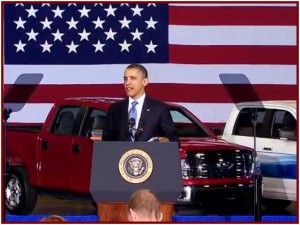 This latest fuel economy mandate requires changes in vehicle size and weight, as well as the use of expensive new technologies during the decade ahead.

The U.S. Department of Transportation and the U.S. Environmental Protection Agency issued the most stringent fuel economy standards in U.S. history today, which will require a claimed equivalent of 54.5 mpg for cars and light-duty trucks by the 2025 model year. This is equal to a global warming standard of 163 grams of CO2 per mile per new vehicle by 2025, although global warming was notably absent in the talking points. The latest Corporate Average Fuel Economy standard follows the record increase in government-required efficiency also set by the Obama Administration for 2011-2016 vehicles, when it was then claimed the mandated fuel economy by 2016 is equivalent to 35.5 mpg.

However, the laboratory test used to determine fuel economy is unchanged since the 1970s. In addition, along with big changes in the demonstrated ability of automakers to use electronic controls to optimize test ratings the actual result is more than 25% higher than what a driver will see in combined city and highway travel. This CAFE rating comes before other credits are issued to automakers – and there are new credits galore in the 2025 rule. Realistically, the fleet driving average will likely be in the 38-40 mpg range. Your mileage will vary from the big numbers being touted in a closely contested Presidential election year. This standard, by the way, is where European fuel economy is right now, so if you want to know what the roads will look like a decade hence, travel to Spain or Italy whose governments desperately need tourist revenues to cover their massive deficits.

Today’s announcement remains in the Administration’s view the first meaningful updates to fuel efficiency standards in decades. Both of the CAFE increases are projected to save American families more than $1.7 trillion dollars in fuel costs, resulting in an average fuel savings of more than $8,000 by 2025 over the lifetime of the vehicle. For families purchasing a 2025 vehicle, the net savings will be comparable to lowering the price of gasoline by about $1 per gallon, President Obama said today. The programs will cut U.S. oil consumption it’s also claimed, saving a total of 12 billion barrels of oil, and by 2025 reduce oil consumption by 2.2 million barrels a day – as much as half of the oil we import from OPEC every day, but only 20% of current oil imports.

In spite of the inflated rhetoric and promises that ignore, say, 3 or 4 owners and a 15-year vehicle life, the new CAFE standard will nonetheless force changes to the cars and light trucks that make up the U.S. fleet. Virtually all new vehicles will have to become much lighter, somewhat smaller and use more advanced technologies than the ones currently on display in dealer’s showrooms. How much downsizing and how much additional cost remain part of a contentious debate. One thing is certain; your choices will be restricted unless you are part of the super wealthy.

Here, factions have little or no creditability, to put it politely – neither environmentalists who previously insisted that electric vehicles could comprise 10% of the auto market at the end of the last century by simply dictating so and are doing so once again, nor the automakers who fought even modest increases in CAFE standards for decades claiming it couldn’t be done. Numbers vary from a couple of thousand dollars per vehicle to as much as $10,000. At stake is nothing short of the American way of life, the future of the shrinking middle class and maybe the survival of the planet from the ravages of its most invasive species in history. These subjects don’t lend themselves to informed discussion in a twittering culture.

When the president made the proposed 54.5 mpg announcement a year ago he was joined by execs from GM, Ford, Chrysler, Toyota, Nissan, Honda, Hyundai, BMW, Volvo, Mazda, Mitsubishi and Jaguar – which account for more than 90% of all vehicles sold in the United States – as well as the United Auto Workers (UAW), and bureaucrats and politicians from the State of California, among others members of the elite ruling class. The automakers, after furiously opposing the increases behind the scenes, ultimately choose to agree because of the stability that known standards provide in an industry with 4-year lead times and a chance to shape the outcome however minimally. It is also a sign of how the automotive landscape has changed post government bailouts with Chrysler, Ford and General Motors beholden to the Administration for billions of dollars in assistance since 2009. (I can’t help but wonder here why the equivalent reforms haven’t happened to banks, bankers and Wall Street firms since they were bailed out to a much greater degree and caused much bigger problems than an autoworker on the way to a plant in her pickup truck.

Automakers as stated had input into the new regulations. And some of the grimble of the new regs appear to be the result of specific needs of individual firms. There are incentives to encourage early adoption and introduction of advanced technologies to improve vehicle performance, including: