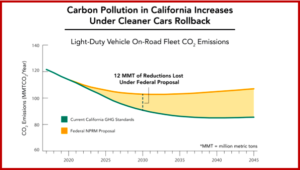 Yesterday, California led a lawsuit with 22 more states and other jurisdictions challenging the Trump Administration’s plan to roll back vehicle emissions standards.

Since these emission rules were enacted eight years ago, they have reduced air pollution and protected the air we breathe. Now the Federal swamp along the banks of the Potomac is over-populated by big money special interests and giving off fetid emissions that need to be cleaned up through more regulation.

The California Air Resources Board helped develop the original 2012 rules and is represented in this case by the California Attorney General. Trump is among global warming deniers, a position – as usual – that has no basis in fact, but is funded by lobbying groups working for those who benefit from exploiting and increasing the use of carbon-based fossil fuels. The 2012 rules would have had automakers increase the average fuel economy of cars and trucks to ~54 miles per gallon by 2025. The new Trump mini-standards require automakers to only improve their average fleet-wide fuel economy to 40 miles per gallon.

“For 50 years, California has led the way by requiring automobile innovations that reduce the health impacts of tailpipe pollution,” said CalEPA Secretary Jared Blumenfeld. “The Trump Administration wants to take us back to a time of increased air pollution, which will have devastating effects on public health. We can’t afford any more kids with asthma – especially given the impacts of the current COVID-19 pandemic. California will continue fighting for a clean air future.”

The new, diminished standards set forth by the federal Environmental Protection Agency and the National Highway Traffic Safety Administration drastically reduce the annual emission reductions from nearly five percent a year to just one and a half percent. The state’s suit claims the EPA and NHTSA have violated the laws and bypassed congressional requirements in enacting these rollbacks, and that the federal agencies used a  flawed analysis, unfounded assumptions, and made statistical errors to manipulate data in support of their conclusions.

“The federal agencies used questionable science, faulty logic and ludicrous assumptions to justify what they wanted from the start: to gut and rewrite the single most important air regulation of the past decade,” said CARB Chair Mary D. Nichols. “Despite all the hype, this rule is a loss for America, as evidenced by their own analysis. Because of this change, we will breathe more polluted air, suffer more premature deaths and see a net loss of jobs in the automobile industry.”

The 2017 decision to maintain the previous vehicle greenhouse gas regulations was the result of several years of in-depth, joint analysis by U.S. EPA, NHTSA and California. Those rules provided impetus for the development of cleaner, safer vehicles and fuels. This was a national shift in efforts to address seriously the impacts of climate change.

“Transportation is 40% of GHG emissions in California, and the previous emissions standards are critical in our effort to combat climate change, as well as to assist in further development and growth of California’s sustainable economy,” CARB said.